The Draw of Downton Abbey

My wife and I spent a good portion of the Christmas Break and various long weekends to catch up on the world wide sensation- PBS's  Downton Abbey. 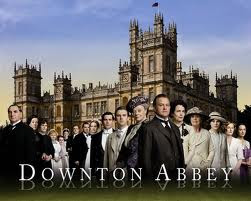 Just a note: We saw all the seasons for free!- 30 day trial Netflix- then 30 day trial Amazon Prime- then got current on PBS app on my ipad. It was impossible to get at the library and even 2nd and Charles wanted a pretty penny for a season on DVD!

In some ways, it is a typical soap opera... reminded me of Alabama football players who got into General Hospital back in the 80's.... (am I admitting that?).

Not one for spoilers- but the last show of the last season has come close to doing us in- as far as how the show left us....it seemed too much 'Down" in Downton and not much 'Up".

But I have a curious idea as the WHY this has been such a big hit. I mean it has been the RAGE of some close friends.... it has been widely reported that season 3 ended with 8.3 million viewers.

One thing is for sure- it has a stylistic appeal. The house, scenic gardens, and fabulous clothing relevant to the setting of the early 20th century... and who doesn't love a good British accent and wit?

But I think it has struck an even deeper cord.

Downton Abbey is one of the few narratives left that is rooted in a Christian world view. It is not a Christian story per se- but the writers have not been afraid to see Biblical practices engaged in the everyday lives of servants and this family of noble heritage.

There are Scriptural references, prayer, church attendance...... even theological discussions at dinner.

Of course there is juicy sin and scandal- but it is scandal because of the sacred canopy of gospel understanding. God's good news is birthed within man's bad news. The moral characters in the show are grounded in gospel hope and the providence of a God who actually exists without endless debate.

What the show truly represents is like finding an oasis in the dessert.

You are tasting water and suddenly realize you have been dying of thirst.

In a world where moral chaos has been in place most of our media life- someone rarely writes and produces in a way that reminds us of the moral compass that dispels the darkness.

The marketplace without God's law is dark and empty. There is no direction or hope. Life is reduced to chemistry and meaning is lost in a sea of frenzied activity; violence for entertainment and consumer addictions as ultimate pursuits.

Rarely is God's name even spoken in modern television, unless it is a statement of profanity.

But Downton Abbey is saturated in a culture where, though dimming, God's light still anchors the soul.

In this world view- a servant is as honored as much as the aristocrat because worth and dignity is seen in living to God's glory and honoring virtue despite one's circumstances.

Not every character is a Christian, nor should they be- art should imitate real life- but what we long for in watching Downton Abbey is not the fancy mansion.... it is the background belief that God still reigns in heaven.

It is what we all really desire- that right and wrong would still be based in the Creator and not in the opinion of men who only do right by their own whim.......

And that is not a longing for the past- it is my hope for the future when the King comes again.