If There Is No Meaning in Marriage- Why the Fuss? 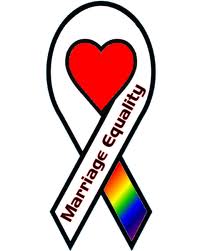 A deeper issue is the quest for gay and lesbian Americans to continue their desire to see sexual orientation as the new civil rights struggle of the 21st century.

This is such a tough topic to deal with- almost impossible to present it as a social issue Biblically because the entire fabric of such a debate is included in the entire Christian world-view of sin, redemption, grace, freedom, Scriptural authority, and the mandate to 'hate sin' but 'love the sinner' application of the entire system, pulled in tow by Jesus' reminder to 'pick out the plank' out of our eyes before judging the speck in others.


We have to be careful here- because there can be no doubt that gay and lesbian human beings have suffered unjust treatment by some- both in the past and currently. I am often touched by the compassion that especially our young people feel when anyone suffers at the hands of others and applaud that empathy.

If we single out any homosexual as 'more sinful' or 'hideous' than other sinners- we have lost an essential concept of the gospel narrative.

But equally important- if we say any sin is OK which God has communicated is not OK- we are ignoring the Biblical surety of consequences built into the activity itself. Whatever a man sows....he will also reap- and empathy can be harmful if we do not lovingly, but boldly state the truth.

I think the hardest part of the entire debate for 'the Church' is that we haven't protected the covenant of marriage within our own walls. Our actions have demonstrated no real value to marriage, so why do we  even feel we have ground to defend it. I know we do and that it is an institution of God- but it is hard to stand firm for something that we let go of so easily.

The saddest stance of all is when officials who say they are ministers of the gospel twist and pervert the Scriptures to OK lifestyle decisions in an effort to seemingly avoid conflict.

Have you ever paid attention to what Jesus said on the subject of marriage?

3 And Pharisees came up to him and tested him by asking, “Is it lawful to divorce one's wife for any cause?” 4 He answered, “Have you not read that he who created them from the beginning made them male and female, 5 and said, ‘Therefore a man shall leave his father and his mother and hold fast to his wife, and the two shall become one flesh’? 6 So they are no longer two but one flesh. What therefore God has joined together, let not man separate.” 7 They said to him, “Why then did Moses command one to give a certificate of divorce and to send her away?” 8 He said to them, “Because of your hardness of heart Moses allowed you to divorce your wives, but from the beginning it was not so. 9 And I say to you: whoever divorces his wife, except for sexual immorality, and marries another, commits adultery.” (Matthew 19:3-9, ESV)


I have always been intrigued about this concession or compromise allowed by Moses. In Deuteronomy 24 an allowance was granted- but what were the circumstances there?

The divorce rate was so rampant at this time in Mosaic history- that the allowance was an attempt to restrain or 'reign' in rebellious sin. That is why Jesus says it was 'because of hardness of heart'- man is going to do it come hell or high water- but this is not the creation mandate or God's design.

Bible believing Christians are in no legitimate grounds to compromise as such- but what if we did?

Would this compromise work?

We will allow same sex marriages if all of society would declare adultery and sexual immorality 'wrong'. All sexual relations would be experienced within a consummation of a lifelong, monogamous marriage vow and divorce would only be granted for reasons of adultery or desertion of an unbelieving spouse?

Of course it would not- it is not a fair fight. Those who desire equal ground desire all the benefits but none of the limitations.


For the Bible believing Christian, there is never going to be a fair fight in the process.

When a protest was called against Chik-Fil-A by the Gay and Lesbian lobby- conservative people rallied from all different motivations to 'undo' the boycott. The large numbers who showed to buy chicken up were criticized by those on the outside and on the inside. The outside argument was this was a show of hate and homophobia. The inside attack was that it was a poor demonstration of love and understanding- clouding the message of mercy by taking a stand that was perceived only as condemnation and hate.

Yet, when the CEO of Starbucks suggests that supporters and shareholders leave his company because they refuse to support same sex marriage- hardly a word is mentioned and the same critics will find fault with anyone who now boycotts the coffee based on a religious belief or moral conviction.

Some will see my stance as 'hate' even though I advocate no violence against any person- I ask that all people be civil in debate and loving in responses- and desire no harm to come to anyone in the process. 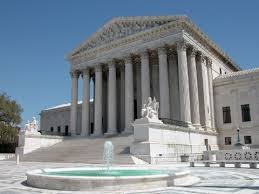 The only civil right in this quest is the quest for ultimate autonomy.. I am my own God, my own church is my own opinion- get out of my way even if you are the Creator Yourself!

A bigger question is: where should the line of restraint be drawn, if it is to be drawn at all?

What would be the bottom line, common denominator, consensus of all of American society when it comes to standards of sexual morality?

How old? How private? How much? How little? I don't have much hope that we find a happy medium within the workings of state. By the way...how much pressure will the state place on churches to perform and recognize SSM's? It will be some of the same oppression that the health care law is having in the area of abortion rights.

This is why Christianity never really fairs well in the arena of hypothetical or theoretical ethics. It is hard to win on one social argument or another- we are part of a different kingdom with a different assessment.... a judgement of the heart first and actions second. A judgement ultimately reserved for God Himself, even though He has granted great authority to His Church on earth.

There are Biblical principles- rock solid ones- and we have broken every one of them.

The only assurances in the Bible believing world are the gospel message based on Biblical promises and Christ's life, death, and resurrection.
Godly law rooted in Biblical mandates.
And the promise that we will all stand in judgement...either an ally of the Lamb of God or offering our own stained record of sin and rebellion to the Holy Creator of the Universe.

There is a marriage of meaning that all marriages are a limited shadow of- the wedding of the Son of God to His Washed and Pure Bride. All paid for and promised by the groom.

When the Son returns, there will be a joyous wedding feast- and others outside weeping and gnashing their teeth.

So the real issue is where do you stand with the offer of the Son?

And have you considered what He says about marriage, divorce, and immorality?

"You who are without sin, cast the first stone"- to the religious.

"Go and sin no more"- to the adulterer.

See how He challenges all of us?


By God's grace, my wife and I are celebrating 25 years of marriage on April 2- but fewer and fewer are getting to such milestones.

I have great friends... much BETTER men and women than me.. who for various reasons saw an end to their marriage... this is not a post about heaping guilt on the hurting and there are Biblical warrants for divorce. But the rise in the divorce rate has had an impact on our society in tangible ways.....


So what of my marriage? My wife of 25 years is my best friend- the godly mother of 3 amazing girls. We are walking out a promise made to God, in front of witnesses, to join together for the purpose of living a life of joy and celebration which glorifies God. Though we struggle and fail, we cling to the good news promise of salvation through faith in Jesus the Christ.

This covenant agreement was officiated by a minister of the gospel who also believes in the Biblical promises of God. We have persevered well..in sickness and in health and not looking forward to ' til death do us part'.

What God has joined together... let no man separate.
Conversely- what God separates... no man may join... even if he passes laws to the contrary.

In oral arguments today, Justice Roberts asked if this argument is just over the term 'marriage' 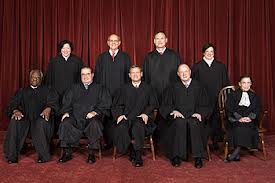 CHIEF JUSTICE ROBERTS: So it's just
about -- it's just about the label in this case

CHIEF JUSTICE ROBERTS: Same-sex couples
have every other right, it's just about the label.

MR. OLSON: The label "marriage" means
something. Even our opponents -­

CHIEF JUSTICE ROBERTS: Sure. If you
tell -- if you tell a child that somebody has to be
their friend, I suppose you can force the child to say,

this is my friend, but it changes the definition of what

it means to be a friend.