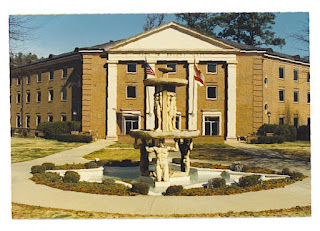 One more snow day and one more football post. I'm actually going to be writing about Albert Einstein in Feb (I'm sorry- but hey it is my blog).

The Alabama JV road show continued in the fall of 1982 and most likely, the program was killed by Livingston University (now West Alabama).

Where the other schools were so happy to be playing us, all I could feel at Livingston was scorn. These were the players who were turned down and not good enough for the Tide. And all through the pre-game, I could smell the venom in the air.

It started when we all noticed Johnny Shepherd, Livingston's little All-American SENIOR Tb, was dressed out. He was a good looking running back.

These guys were big, I don't know if it were all varsity guys or not, but they had their mad on.

One little side note was that I had been offered a scholarship by Livingston. Coach Delasandra (asst who recruited me) was not happy the day I turned them down to walk-on at Alabama. He told me that I was just 'going to be a blocking dummy at Alabama' and that it was just a 'stupid decision'.

But I had not liked anything about Livingston. I didn't hunt, and it was the main pastime at Livingston. On my recruiting trip there, I saw a deer hanging from a tree at city hall! Coach Dee said it was a poacher's deer. (Now I am all for hunting.. but city hall?)

We made 3 laps around the campus in Coach Dee's car and all he bragged about was their Crispy Chick restaurant. He mentioned it three times!

As I was on the phone with him all I could think about was it seemed better to be a blocking dummy at Alabama than eating every meal at the Crispy Chik in Livingston.

Almost 1 year later, I looked over at Coach Dee and thought that I was about to be prime rib for a University Scorned.
Now I need some help here, but we dressed a GOOD tight end for this game- and I think it was Preston Gothard- but my memory says that that is impossible. It wasn't Jay Grogan- but all those guys kind of look the same.. who was it?

Anyway, we put in a play action pass during pre-game and worked it. I would run the option, take a few steps down the line, step off the line, and hit the big boy on a corner route.

Here's the problem... we ran it over and over during pre-game. The Livingston coaches were all lined up and watching us do it. I had the same experience years later as a coach, when a team in Montgomery worked on a play like that. We coached it up before the game in the locker room, they ran it the first play of the game, and we intercepted it and ran for a TD. Yes, those things do happen in football.

So we start the game.

Johnny Shepherd returned the opening kick-off for a TD. I don't know if they have records from that game- but I know that he set numerous records on this afternoon. No one saw it though, because I forgot to mention that they had a bout 3 fans in the stands.

We get the ball. 1st down dive. No gain. 2nd down option. No gain. 3rd down play action pass.

I stepped off the line and out big TE had the corner under him and the safety over him. There was no place to throw the ball. So I gave a little pump fake, and ran for the chains.

I got just past the first down and was crushed out of bounds. The official walked up and spotted the ball two yards shorter that that.

I looked at him, "You've got to be kidding me!"

He spat back with a profanity laced rebuttal to go to my sideline and be quiet. I had never been cursed at by an official.  I know this sounds insane, I am thinking about Will Ferrel's movie Elf when he said "You're not the real Santa Clause". That fateful day.... were those real officials? Who would know?

I jog over to the sideline and Coach Amos was there. He is now the special teams coach for the Green Bay Packers. Now, Coach Amos had been very nice to me for 2 games and a few practices. He would tap me on the head and say encouraging things which I translated, Bless your heart- you can't help it, look at what we have, and how we never practice yada yada yada.

But Coach Amos finally snapped and blasted me. I don't think he cussed, but it may be due to my adjusting to the official's vocabulary, but no mistake about it HE WAS MAD.

"Throw the ball to your Tight End!"

"He was covered" I mumbled back.

It wouldn't take long to get the opportunity. Johnny Shepherd ran a TD in one play.

Next series. 1st down dive. No gain. 2nd down option. No gain. 3rd down play action pass.

This time I stepped back and threw it.

Side story 2. I am about as even keel guy as you will ever meet. But when I do get mad it is a scary thing. All the years I played Qb, I got almost homicidal if someone intercepted me. In my head, I have a highlight tape of hits I have made on DB's who picked me off in high school. I even had a good one against Marion that year.

So when I threw it, I just took off after the ball already looking to kill whoever caught it.

It was the safety. And I attacked him in unrighteous fury.

On the way, I saw this blur and the warning signal went off in my head. It was a linebacker who was stalking me, I was about to get snot rocked.
And then I did something that I had never, ever, done on a football field in my life. I stopped, turned, and swung my fist at him with everything I had.
I missed his head (which is good because all fighting does in football is break your hand), but the top of my forearm happened to catch the corner of the buckle of his helmet. As my arm grazed by, his buckle sliced me like a scalpel about 6 inches of my forearm.

I got up, squeezed the wound together, and ran over to the sidelines. Coach Amos was roasting me good and stopped in mid-sentence. My arm was bleeding pretty good. "Trainer!"

We did have 2 docs and a training staff with us. I'm alsmost sure it was Dr Deshazzo who examined me. It was a pretty deep slice.

He wrapped it up. I watched Johnny Shepherd rush for 400 yds. The game climbed into the 40's to zip.
Coach Dee acted like he was concerned about my injury. And Dr Deshazzo stitched me up back in Tuscaloosa.

I did play on special teams our last JV game at home. Perry Cuda played QB and exacted revenge over Marion.

I moved to Strong Safety the next year under Coach Perkins and had a fantastic time with Lee Clements, the Lombardo brothers, Sammy Hood, Ricky Colbert, Scott Conell, Thom Whitely, and a host of others.

I could write a book about 'the daily target'- 'my hit on Craig TD Turner that almost killed me'- 'off season with Al Miller'- 'Scout team hiding in the bushes before practice wearing Tennessee colors'- and many many others.