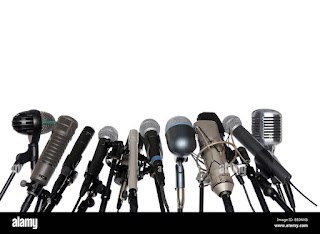 Do you ever fear being EXPOSED? Isn't that a part of the fear of social media as well? Do we all imagine waking up one day to find ourselves targets of an avalanche of negative opinions, serious charges, and subtle, snarky jabs? Is it any different from the nightmares of going to school without our clothes on?
People who live in a more public spotlight experience this. As an AD, I work with coaches who live with a reality that there is a visible grade of job performance after every game.... the scoreboard. And it isn't that black and white. Sometimes I am having to counsel a coach who won a game, but they are wounded by the public perceptions about how they won, or if they played enough players, and the many types of second guessing that accompany the sports world where opinions are free and sometimes cheap.

ex·po·sure
2.the revelation of an identity or fact, especially one that is concealed or likely to arouse disapproval.
Ex: "she took her life for fear of exposure as a spy"

A good friend of mine wrote his dissertation about whether anonymous student evaluations of teachers is a valuable tool in helping teachers grow in their craft and he asked me to help him tabulate the results of hundreds of surveys over a two year period.
At the beginning of the process, I was way more obliged to have doubts and concerns about the usefulness of such a tool. Does this empower the students to give a thumbs up or thumbs down in the Roman coliseum with a ferocious tiger ready to shred the loser to shreds?
And then I began to read and record the data. It was what I would expect. There were a number of students who rated the teacher as 'the worst of the worst' and some rated the same teacher as 'best of the best'. Some wrote comments that were way too general and full of hyperbole. "No one likes Mr. Smith" which wasn't true, because I had just read 4 previous surveys who said the opposite.
Here was one more fascinating part of the surveys. As an administrator in the school, I felt like I had a good read on who the really good teachers were and who were the bad eggs by the soundbites that was the most common 'in the hallways'- but to my surprise, even the rock star teachers has comments that were not complimentary and some of the teachers who I thought 'no one liked' had students who gave them a very high rating and wrote comments like 'my favorite teacher of all time!'.
Now, this should not have taken me off guard. It was Patrick Henry, in his speech to the Virginia Convention who said it the best (our politicians could learn a lot from this opening which followed speeches from his opponents).
NO man thinks more highly than I do of the patriotism, as well as abilities, of the very worthy gentlemen who have just addressed the House. But different men often see the same subject in different lights; and, therefore, I hope that it will not be thought disrespectful to those gentlemen, if entertaining, as I do, opinions of a character very opposite to theirs, I shall speak forth my sentiments freely, and without reserve.
So where am I going with this? The gospel is too good and life is too short for us to waste any time living the life of an imposter OR paralyzed by what other people think.We often shrink or hide from the fear of encountering opposition or people who do not like us.
I'm discovering a wonderful release when I dive headlong into the ability to say what I want and be who I am regardless of what the reaction may be. Ultimately, my concern should be my love for God and my desire to live according to the golden rule. Both require us to NOT be selfish... but it is also a freedom to be ourselves.
THE PRESS CONFERENCE
I have always sort of imagined this as a press conference where I am about to have to go out and face hostile accusers who are rabid in their hatred of me. They wag their heads and spew their venom, mostly twisted lies and gossip, but also some elements of truth.
Just as I am about to have to face them, the Father, Son, and Holy Spirit come to me.
"What those people think outside is a very trivial thing. What we know of your true heart is worthy of condemnation... you know that. If the people outside knew of your true inner nature, then there would be ample room for scorn.
But guess what? Though your sin was a crimson stain, you are now freely justified, forgive,... you are a Son of the Lining King of the Universe!"
"We've got this", says the Son.
And the curtain comes down.
I can face the most vicious attack now.... you can't hurt a dead man.
In fact, it is very therapeutic to listen to the accusations now. My wife is hurt because I haven't loved her like I should. I have the freedom to change that. I have said or done things I should not have done... but I can empathize. I can forgive others because I have been forgiven.
I can't be mad at them- God is no longer angry with me.
And some will see the radical hospitality and forgiveness and find God. Others will be even more enraged.
"In the fall the war was always there, but we did not go to it any more."
In Another Country (1926) by Ernest Hemingway
[5] Better is open rebuke
than hidden love.
[6] Faithful are the wounds of a friend;
profuse are the kisses of an enemy. (Proverbs 27:5–6 ESV)
Be free to listen to others without fear!
Posted by Jayopsis at 11/17/2022 07:37:00 PM