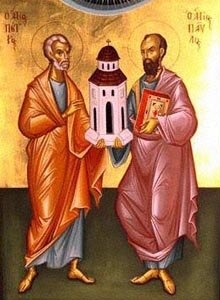 As I close out 1st Peter today, I am prepared to take another break from writing for a time. It has been good to take time away from it to read, research and pray.

There is A LOT more here in 1st Peter 5 than what I cover. I noticed that I skipped over spiritual warfare, and the collaboration with Silvanus... both are worthy of some discussion.

Today's passage contains one of the wisest pieces of advice I have ever received in Scripture.

I find myself rather weary of this shut down. I don't feel right to complain because so many have really suffered and I am blessed to still have a job and to have health.

We need to pray for each other..... we all need encouragement and perseverance. And I have grown to understand the signs of the mild depression that visits me from time to time. I have come to embrace it is a sign of aging and the reality of how unfulfilling this sin cursed world is. And I never doubt the presence and goodness of the Lord.

[1] So I exhort the elders among you, as a fellow elder and a witness of the sufferings of Christ, as well as a partaker in the glory that is going to be revealed: [2] shepherd the flock of God that is among you, exercising oversight, not under compulsion, but willingly, as God would have you; not for shameful gain, but eagerly; [3] not domineering over those in your charge, but being examples to the flock. [4] And when the chief Shepherd appears, you will receive the unfading crown of glory. [5] Likewise, you who are younger, be subject to the elders. Clothe yourselves, all of you, with humility toward one another, for “God opposes the proud but gives grace to the humble.”

[6] Humble yourselves, therefore, under the mighty hand of God so that at the proper time he may exalt you, [7] casting all your anxieties on him, because he cares for you. [8] Be sober-minded; be watchful. Your adversary the devil prowls around like a roaring lion, seeking someone to devour. [9] Resist him, firm in your faith, knowing that the same kinds of suffering are being experienced by your brotherhood throughout the world. [10] And after you have suffered a little while, the God of all grace, who has called you to his eternal glory in Christ, will himself restore, confirm, strengthen, and establish you. [11] To him be the dominion forever and ever. Amen.

[12] By Silvanus, a faithful brother as I regard him, I have written briefly to you, exhorting and declaring that this is the true grace of God. Stand firm in it. [13] She who is at Babylon, who is likewise chosen, sends you greetings, and so does Mark, my son. [14] Greet one another with the kiss of love.

Peace to all of you who are in Christ. (ESV)

I have really enjoyed this walk through I Peter. I found myself mulling over the book throughout the day and as I pondered the words on my pillow at night. It is a great balance between exhortation and encouragement.

Pretty neat that he closes with the imagery of a shepherd. Again, Jesus restored Peter with that idea of 'feed my sheep".

My take on this is that Peter is anticipating the end of his ministry, not just the end of a letter. We get a fuller sense of this at the intro of 2nd Peter:

[12] Therefore I intend always to remind you of these qualities, though you know them and are established in the truth that you have. [13] I think it right, as long as I am in this body, to stir you up by way of reminder, [14] since I know that the putting off of my body will be soon, as our Lord Jesus Christ made clear to me. [15] And I will make every effort so that after my departure you may be able at any time to recall these things. (2 Peter 1:12–15 ESV)

So, as a faithful disciple, he has been a disciple maker and exhorts those who will be leading after he has departed. This is the most crucial aspect for the future of the church- not what are we leaving behind... but WHO?


Now, let me point out the wisest advice that I have found in the whole letter....

'SHEPHERD THE FLOCK THAT IS AMONG YOU'

See, this piece is directed toward spiritual leaders- and most leaders are always looking to lead bigger and better. This urge to move forward can create a general discontentment. Musicians want to be discovered, young pastors want to land the big congregation, assistant coaches want that head coaching position- but I love what Peter says- learn how to oversee the group you have been honored to lead. Don't look ahead- be found faithful where you are.

To me it starts in my home- I need to be found as a good shepherd to my flock of Mathews. Even as they are now moved out and on, how am I doing in loving, praying for, and encouraging them?

How am I to do it? Accept the rule of oversight and diligently be involved in their lives. I don't need to be their KING, I need to set an example in service and humility. I need to trust God and allow him to develop in me a godly contentment.

Next, I have a group of quarterbacks and anglers- same deal.

When I originally left Briarwood in 2003, I had become very discontented and overly ambitious. I wanted to lead my own program and was just cocky enough to push hard to find that opportunity.

Four times previously, I had finished as a runner-up for a head coaching position and each time grew more frustrated. The offer to move from Nashville actually came from them. I twice said NO and then went to interview. And we went for it.
Looking back, it was God's will for me to go. But it seems like (as far as how it applies to me), it was God using circumstances similar to Jacob working for Leah (7 years) when he thought he was getting Rachel.

When it looked like it was God's plan for me to return to Briarwood, you can imagine how it hit me. At first I thought, "I'm like a whipped puppy coming home with his tail tucked between his legs". I imagined the reception being something like- "Couldn't cut it huh?" Was I a complete failure?

And, here was the most interesting part- not only was I no longer a head coach, I wasn't even going to be the coordinator. I was going to just be a position coach.

But the Holy Spirit did something rather remarkable- He granted me a sincere 'God sent' contentment. And the day before I accepted the job, I felt my spirit and God's spirit come to a point of unity- Lord, I know You are in control- I willingly lay all of this down at the foot of the cross- and won't worry about 'being in charge' or 'calling the shots'- I'm going to love the players I have and 'shepherd my flock' with passion and energy.

The result? This year was the greatest professional; year of my life! The people at Briarwood only expressed love and excitement at my return. They made me feel special again after my last few years in my old position where my leadership beat me up on a consistent basis.

My wide receivers were amazing to work with, we texted in group me, we went out to eat, we laughed, we worked hard and we improved. It was incredible!

I never felt frustrated. I was part of a great team of men  who didn't care who got the credit and we respected one another and shared the workload.

I have now for a long time misunderstood the verse, humble yourselves, therefore, under the mighty hand of God so that at the proper time he may exalt you. This doesn't necessarily mean he takes a pauper and makes a king. It most likely means that He sustains you in the task He has called you and will reward you at the day of glorification.

So as a spiritual leader (in my home, as a coach, as an athletics director, as a small group leader, as a Sunday school teacher)- what does this passage say to me?

And what does Christ promise here?

He will RESTORE me

He will CONFIRM me

He will STRENGTHEN me

He will ESTABLISH me


Peter's powerful testimony is proof of the truth of all these things.
In a much smaller way- this blogger can give the same testimony.


Like Peter , I can proclaim... "I have written briefly to you, exhorting and declaring that this is the true grace of God. (Let us ALL) Stand firm in it"