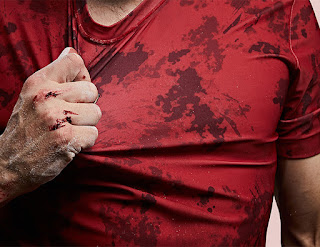 We had an excellent chapel this week at BCS from Dr. Travis Coblentz who teaches in the UAB department of philosophy. His message was one that no one ever gives to teens.... why it is good that they embrace suffering. Suffering provides opportunities and direction to a life of meaning. When we spend our lives pursuing pleasure and avoiding pain, we end up with a rather uninspired existence. We do hard things and endure hard things for the cause of Christ and the pain is so worth the reward.

I'm not sure if it resonated.... we often waste the best literature and truths on the young- I hated these types of things as a 16 year old... if someone asked me "Why is there air?" my only answer was to "pump up footballs".

So in God's good timing and providence, he sent me to the emergency room last night with a bout of diverticulitis that comes my way every decade or so. I have enough experience with it to notice the symptoms and if I get the diagnosis and antibiotics quickly, it is painful, but I can endure.

A lot of pain in that ER... and my cold sweats and surges of pain did not give me much time to empathize or minister. I did however hear the voice of Christ... from my recent revisit to the Book of Revelation in prep for teaching...

Here is what is interesting to me about Jesus...he doesn't do relativistic comparisons.... He doesn't judge me that I am hurting but doesn't try to say, "But over there is real suffering"- at the same time , He is sovereignly in control of ALL issues- He has experienced them and He has a plan for them. I also need to be more aware of how I can minister to others in pain.... knowing that a student hurting because their parents are divorcing IS REAL PAIN.

At the same time, we waste a lot of energy trying to take all discomfort away from young people. I never want to inflict ANY hurt on anyone, but I also know a pain free life is a risk free life.

Pain WILL come though... and we all need to be trained to endure it.... even embrace it with a faith that says like Job "Though he slay me, I will hope in him; yet I will argue my ways to his face". (Job 13:15 ESV)- don't leave out part B to that verse...God can handle it.

The best training ground I have ever seen to train snowflakes into warriors is sports. Any discipline (work, fine arts, academic) works as well. But sports, especially those with contact, help train the muster it takes to make it.

Here is how Paul said it:

Every athlete exercises self-control in all things. They do it to receive a perishable wreath, but we an imperishable. [26] So I do not run aimlessly; I do not box as one beating the air. [27] But I discipline my body and keep it under control, lest after preaching to others I myself should be disqualified. (1 Corinthians 9:25–27 ESV)


As many of you know.... I do have a lengthy philosophy on competition....
Where and how competition fits in within the Biblical guidelines for people has always intrigued me.

A competitor is enhanced or held back by those he surrounds himself with.


And this may sound simple, but a competitor competes with others….


The natural instinct of any competitor is to get the energy drainers out of their way.


Often these ‘energy depleters’ are those who don’t want anything…. they aren’t hungry, they aren’t dreaming, they aren’t striving. It isn’t that they are content, it is simply they have become too complacent.


Competitors grow by surrounding themselves with passionate, confident, and motivated people….people who are unstoppable… and,to be honest, they are often illogical and unreasonable in the passionate power of their pursuits.
True competitors are the kind who dare to battle the demons of the status-quo and get a lot of detractors from doing so.


Competitors exude a passion to either conquer or die- they are ones who will push back against all conventional wisdom….. and enjoy going against the grain.


and, competitors often  achieve what was thought to be previously impossible.


When you read that kind of description- who could argue against that?… those are the winners of the world.


But the qualifying questions are: by what means and by what cost?

Ultimately, a Christ honoring life results in scars.... that is OK, Jesus kept His scars after the resurrection... think about that

I close with this.... I have always been intrigued by this statement from Paul:

" From now on let no one cause me trouble, for I bear on my body the marks of Jesus". (Galatians 6:17ESV)

From the context, it is in part his reference, I believe, to his on going eye condition, being surrounded by detractors and imposters, and the nature of the glorious fight he was in.

He EMBRACED the aggravations and pain- and because of that, he lived in fear of no one.

If you want to delve into more thoughts on competition... visit this post http://www.jayopsis.com/2017/01/jacob-as-competitor.html


As a head football coach in Nashville in 2006, David Cutcliffe- my high school head coach and now Duke Head Coach- visited us.

He looked at our football coaches and said, "I need men like you to push my son in ways that I can't do as a dad." We weren't coaching his son, he was speaking metaphorically, but the point was well made.

Coaches are part of God's strange ministers to push and prod... it is getting harder and harder to keep the parental protections out of the mix... I never hold that against a parent by the way- I know parents love their kids!

But if you are a parent, let the sports arena be tough- don't wish pain... but allow the process to shape a warrior.

I firmly believe sports (especially football) is an important opportunity to develop a rugged disposition to fight. Putting on gear and experiencing fear, pain, exhaustion, victory, and defeat is an experience offered in few other places in society.
A coach pushes his players beyond where they think they can go and when they get there, they realize they could have even done more. These tough teachable moments can happen in the weightroom, in the film room, on the practice field, and in games. It is not easy as a parent to allow that ‘push/pull’ type of coaching to take place…. But young men NEED that grind under caring mentors that our coaches are always intending to be.

That is why I call it a 'strange minister'.