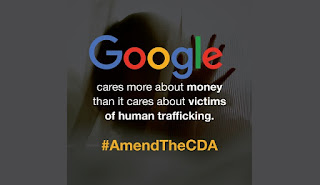 There is a looming battle (already enjoined but will take center stage soon) which could make William Wilberforce's battle vs slavery for 20 years seem like an innocent game of charades.


Based on the money involved and rhetoric of the players, this will be a battle that will stretch the core of democratic ideals, personal liberty, and the protection of the most vulnerable and most valuable of our citizenry.

It is also a battle that will create strange bedfellows- both liberals and conservatives will split into bi-partisan positions that will be staked out on both sides of the argument.

In short, section 230 of the Communications Decency Act will be held up as a must save provision to protect free speech on the internet by some and many others will ask for a re-vision to restrict what has become a cover for child sex trafficking and other illegal activities. The 'headlines' and hypotheticals of each case will provide a range of emotional responses.....

Just in the current promotional material for both sides you have trigger pushing debates of whether we could lose Twitter or Facebook under the weight of lawsuits because of 3rd party posting along with the heart breaking tales of children who have been sold openly on the internet  without impunity.

I am going to make a statement about this that is true, but offers no resolution and then make a proposal that might be a course of action in tweaking the section to protect the innocent.

The Bill of Rights (1st 10 amendments) in our great Constitution has a a preliminary principle that is crucial in its interpretation and application. Sadly, it is a principal that has been lost in time.

We love and hold to these fundamental rights, that protect us........

But the Constitution and the Bill of Rights should always be understood by the self-evident truths that birthed our quest for freedom in the first place.... expressed in the Declaration of Independence


We hold these truths to be self-evident, that all men are created equal, that they are endowed by their Creator with certain unalienable Rights, that among these are Life, Liberty and the pursuit of Happiness.


When we apply the Bill of Rights without an acknowledgement to The Creator (with implied rights as the Supreme Governor) we lose the foundation and perspective of these rights.

A purely secular view of these rights creates unsustainable, philosophical, hypothetical, and ivory tower academic musings which eventually crumble under the weight of human presuppositions.

AND though this statement is true... it doesn't help us find a route out in this on-going debate regarding CDA 230.

The ability to find a compromise of protecting free speech and curtailing criminal activity that hurts people isn't easy. And I am not one to promote the slippery slope of eradicating liberty.

But I want to propose a direction that allows 'free speech' but discriminates between 'free' speech and 'speech for profit'. Is there a way to tweak CDA 230 that guts the money pump that keeps dangerous speech out in the open and always open for business?

The record profits being pulled in by sites like 'backpage.com' is the only reason these practices are being defended in the first place.

There is a right to free speech, but do we have a right to financial gain for such speech?

When it comes to the internet- make sure that the sites are allowed to profit from commercial advertising, but also put measures in place that they cannot collect revenue from the 'forums of free speech'.

If a sex trafficker wants to post a minor for sale, it would have to be a free posting that a site like backpage.com could not collect a fee for advertising. I express this hideous example just for the sake of argument.

If a merchant wanted to buy advertising on a site, they would have to pay and the commerce could be curtailed by legal standards of trade that all 'merchandise' must meet.... including the protection of children.

I doubt we will ever see sin eradicated from the web because it will always prevail in the human heart. But I also say we never tire of making it hard to grow and we never encourage it.

By taking the profit out of it, we drive it into the dark internet, where bitcoins and other encryption practices will keep it alive.... but it doesn't have to thrive in the open while fat cats take the 5th in court and count their money on a journey to meet the very Creator who holds them accountable.

I know we live in a world of political impotence... but I do ask all congressmen of all parties to consider some action that keeps our nation on a path of righteousness and not greedy gain at the exploitation of others.....

The time to act is NOW.