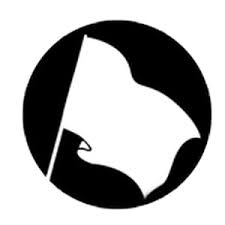 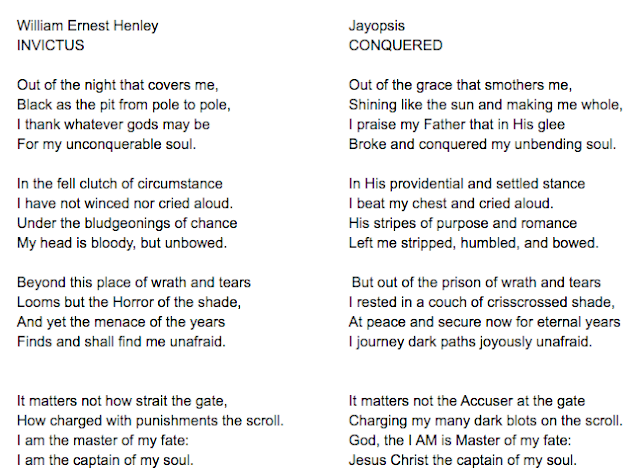 I appreciate the poem Invictus, especially when you think of how it helped sustain Nelson Mandela for 27 years while he was in prison. I understand the power and application of Invictus..... and I never want to ever squash the God-given desire to live, to create, to conquer, to win, to compete, to own.

When you read various survival stories... the one who survives has a deep 'will to win' that surpasses the limits of nature and imagination.

But 'INVICTUS' carried to its ultimate end is eternally dangerous. What is true about Invictus is always borrowed from THE TRUTH. A personal resolve to persevere is one thing... but to acknowledge the only, true, and living God in the midst of struggles is a much better thing!

We need to constantly ask ourselves.. what mode of salvation are we 'trusting in'?

There are fundamentally only two doctrines of salvation : that salvation is from God, and that salvation is from ourselves. The former is the doctrine of common Christianity; the latter is the doctrine of universal heathenism. "The principle of heathenism," remarks Dr. Herman Bavinck, "is, negatively, the denial of the true God, and of the gift of his grace; and, positively, the notion that salvation can be secured by man's own power and wisdom. 'Come, let us build us a city, and a tower, whose top may reach unto heaven, and let us make us a name.' Gen. 11 : 4.


Whether the works through which heathenism seeks the way of salvation bear a more ritual or a more ethical character, whether they are of a more positive or of a more negative nature, in any case man remains his own saviour; all religions except the Christian are autosoteric (self salvation).


BB Warfield 'The Plan of Salvation'

Self-salvation that carries no thought of God at all slowly and inevitably takes a toll.

My oldest daughter has spent the last year as an ER nurse at a hospital. Her stories have been eye-opening to say the least!

One case had her securing the head of a gunshot victim because the family had driven the victim right to their door.

The saddest commentary she relates is how death is so common where she works that there seems to be a loss of the sanctity of life. Sometimes the surviving family members don't even cry, it is like it is just the common lot of human beings trapped in a cycle of crime, dependency, isolation, and decay.

The cheapening of life has dramatic social consequences. As life loses its value homicidal and suicidal actions can be just a whimsical choice colored by the flavor of the day.

Can the loss of the beauty of life be connected to the erosion of the knowledge of God?

I often wonder about this.

If we thought more of God, would there be a greater concern for the afterlife?

And if we thought more of eternity...would it make us pause in reverence and fear regarding our choices?

When was the last time you heard a good, thoughtful Bible based exposition on the reality of hell?

How about a few famous quotes from C.S. Lewis?

The safest road to hell is the gradual one — the gentle slope, soft underfoot, without sudden turnings, without milestones, without signposts. –C.S. Lewis, The Screwtape Letters

“There is no doctrine which I would more willingly remove from Christianity than this (hell), if it lay in my power. But it has the full support of Scripture and, specially, of our Lord’s own words; it has always been held by Christendom; and it has the support of reason” –C.S. Lewis, The Problem of Pain

“I have met no people who fully disbelieved in hell and also had a living and life-giving belief in Heaven” –C.S. Lewis, Letters to Malcolm: Chiefly on Prayer

In the long run the answer to all those who object to the doctrine of hell is itself a question: “What are you asking God to do?” To wipe out their past sins and, at all costs, to give them a fresh start, smoothing every difficulty and offering every miraculous help? But he has done so, on Calvary. To forgive them? They will not be forgiven. To leave them alone? Alas, I am afraid that is what he does.

“The damned are, in one sense, successful, rebels to the end; the doors of hell are locked on the inside. . . . They enjoy forever the horrible freedom they have demanded, and are therefore self-enslaved.”

“the demand of the loveless and the self-imprisoned that they should be allowed to blackmail the universe: that till they consent to be happy (on their own terms) no one else shall taste joy: that theirs should be the final power; that hell should be able to veto heaven.” –C.S. Lewis, The Problem of Pain

Who spoke more of hell than anyone?


" I have read the speculations of Schleirmacher, Bultman, Tillich, Brunner, Barth, and Moltmann, to say nothing of Plato, Kant, Hume, Feurbach, Lenin, and Bertrand Russell. All offer logical explanations used to discredit the notion of eternal punishment.....While I am deeply impressed by the arguments of brilliant thinkers like Schleirmacher, Tillich, and others, I prefer our Lord's words to theirs.

Those who acknowledge Jesus Christ as Lord cannot escape the clear, unambiguous language with which He warns of the awful truth of eternal punishment." Kenneth Kantzer (quoted by Robert A. Peterson)

In the Bible, Jesus spoke more about hell than anyone else did. He referred to hell as a real place (Matthew 10:28; 13:40–42; Mark 9:43–48). He described it in graphic terms: a fire that burns but doesn’t consume, an undying worm that eats away at the damned, and a lonely, foreboding darkness. These are likely only symbols of something worse that we can imagine.

Robert A. Peterson outlines just in the Gospel of Matthew four distinct truths that Jesus teaches regarding hell.

Listen to these warnings from Jesus Himself!

Woe to you, scribes and Pharisees, hypocrites! For you travel across sea and land to make a single proselyte, and when he becomes a proselyte, you make him twice as much a child of hell as yourselves. (Matthew 23:15 ESV)

You serpents, you brood of vipers, how are you to escape being sentenced to hell? (Matthew 23:33 ESV)

Hell is ruled by God

And do not fear those who kill the body but cannot kill the soul. Rather fear him who can destroy both soul and body in hell. (Matthew 10:28 ESV)

“Then he will say to those on his left, ‘Depart from me, you cursed, into the eternal fire prepared for the devil and his angels. (Matthew 25:41 ESV)

And then will I declare to them, ‘I never knew you; depart from me, you workers of lawlessness.’ (Matthew 7:23 ESV)

I tell you, many will come from east and west and recline at table with Abraham, Isaac, and Jacob in the kingdom of heaven, while the sons of the kingdom will be thrown into the outer darkness. In that place there will be weeping and gnashing of teeth.” (Matthew 8:11-12 ESV)

Then the king said to the attendants, ‘Bind him hand and foot and cast him into the outer darkness. In that place there will be weeping and gnashing of teeth.’ (Matthew 22:13 ESV)

And cast the worthless servant into the outer darkness. In that place there will be weeping and gnashing of teeth.’ (Matthew 25:30 ESV)

Let both grow together until the harvest, and at harvest time I will tell the reapers, Gather the weeds first and bind them in bundles to be burned, but gather the wheat into my barn.’” (Matthew 13:30 ESV)

Just as the weeds are gathered and burned with fire, so will it be at the end of the age. The Son of Man will send his angels, and they will gather out of his kingdom all causes of sin and all law-breakers, and throw them into the fiery furnace. In that place there will be weeping and gnashing of teeth. Then the righteous will shine like the sun in the kingdom of their Father. He who has ears, let him hear. (Matthew 13:40-43 ESV)

So it will be at the end of the age. The angels will come out and separate the evil from the righteous and throw them into the fiery furnace. In that place there will be weeping and gnashing of teeth. (Matthew 13:49-50 ESV)

the master of that servant will come on a day when he does not expect him and at an hour he does not know and will cut him in pieces and put him with the hypocrites. In that place there will be weeping and gnashing of teeth. (Matthew 24:50-51 ESV)


Are you tired of the battle? Could it be that you are fighting One with eternal power?


An 'absolute' is basically an unchanging point of reference by which all other changes are measured. For the Christian, the starting point is always God. He is the eternally existent one, the absolute, from whom we draw all definitions for life's purpose and destiny.God does not expect us to come to Him in a vacuum. He has so framed this world and our minds that the laws of reason and logic that we use lead us to the certainty of His being, and assure us that we may know Him who is the source of all truth.
Ravi Zacharius


It's OK to lose when the result of losing is winning.

It is OK to humbly bow to a more powerful foe when that foe really wants to be your Father.

You don't have to know all the 'whys' ... just be embraced by the WHO.

Reading your C.S. Lewis quotes and thought if you have not heard the song by Hillary Scott of Lady Antebellum, 'Thy Will Be Done' you ought to. Funny how so many of our prayers would be answered if we started the Lord's Prayer and stopped after those 3 words.Enjoy your day.
Sandy Patterson