Don't Over Analyze The Tide 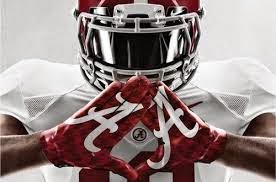 We live in a world of prognostication and 'expert' opinion. There are so many 'analysts' that we have entire networks whose content carries as much analysis and opinion as actual contests!

But I would be lying if I said that I wasn't a participant and consumer of the the bark and bluster.

But I feel like I needed to offer some restraint on those who have written off Alabama's defense based on the Auburn game.

I have spent most of my years as a coach on teams that emphasized defense. Most coaches would admit (if they HAD to choose) that they would rather be good on defense better than being good on offense. A great defense keeps you in every game.

Most teams who are better on offense will have the ability to light other teams up...but there is always that sad loss where you are a better team, but you just keep mis-firing and you get run off the field by an opponent you should not lose to.

Alabama lives and thrives on defense.....
But, when you look at an entire season, it always makes you feel good when an offense saves you when you have a poor defensive outing.

In Alabama's case, an explosive offense and an aggressive play caller avoided what could have been an ugly upset last Saturday night.

And what makes this Alabama team fun is that they win games as a complete team.

Through a coaches eye... I see where good play on both sides of the ball aided the win against Auburn and failure in all three areas (special teams/defense/offense) contributed to the close loss in Oxford.

Why is Alabama the most dangerous team in the country? They are the deepest team in college football and they play as a team.

When an analyst says Alabama was torched by the Auburn offense... he is really pointing to long passes that were outstanding plays by the Tigers.

Alabama's worst stretch of the game defensively was EARLY in the game, where... even though they were up 14-6.... had given up too many big runs inside the tackles.

Once the inside game was plugged up. Auburn was left to connecting over the top. That is a play Alabama wants teams to take. The theory is that if you can keep those throws from scoring TD's, and you make teams kick FG's in the red zone.. you can win IF you play good offense and special teams.

The biggest improvements I have noticed this season include Alabama using 4 defensive linemen more and getting a great pocket push from those 4. And it is a deeper team. I thought Alabama looked fresher in the 4th quarter than Auburn, in spite of the many number of plays Auburn ran.

The other improvement is the mobility of the QB. Simms' ability to extend plays has done what McCarron was not able to do last season (no disrespect to him intended- who can argue with his career?)

This is the most explosive offense Alabama has shown even though other teams may have been better. You have to credit Lane Kiffin's style.... he has no fear and calls the game loose and confident.

Special teams still frustrate the fan in me. UA's punter is amazing, but kick-off coverage scares me and FG situations make me very uneasy.

And Alabama is VERY good on defense. If you end up in 3rd and long... look out!

Based on that, here is how I see the rest of it playing out.

Missouri will be toughest against the Alabama offensive line. But Alabama's defense will limit Missouri's scoring opportunities. If no one panics at a low scoring and close halftime score... Alabama's depth will salt the game away in the 2nd half.

With Mississippi State being out of the 4 team playoff...that has helped Alabama. There will be no team in the final 4 that has the defensive front 7 like Alabama.

Missouri is the most dangerous game of the 3 potential games remaining.

If I were having to guess... (no particular order after Mizzou)

Alabama 31- Missouri 17 in a game that was very close until mid-way thru 3rd Q.
Alabama 24- FSU 13- Defenses dominate the game
Alabama 28- TCU 21- Exciting game with good plays on both sides
Alabama 35- Oregon/Baylor 24 (people will be surprised at how athletic defensive linemen hold down 'super spread' teams scoring)
Alabama 31- Ohio State 24- (people will be surprised how well OSU plays the Tide)