THE HAM/NYE DEBATE- Do I Really Want to Write This? 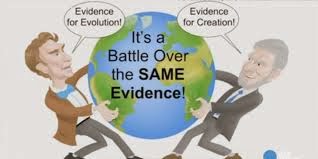 I have said "No" to this post for three days...... but here goes a fool rushing in where angels fear to tread.....

I watched the Feb. 4 debate between Ken Ham and Bill Nye with concern about the format and what might be left in the wake of the process.

I was relieved and thankful that both men were fairly civil in the presentations AND I'm so grateful for the technology today that allowed both men to use keynote slides and videos.

In the end, there was nothing new... both sides are well documented in their arguments and my guess is that not one single human being was moved off of a settled position.

I do agree with some pundits who proclaimed Ken Ham a 'winner' in that he got the debate in the first place.

The thing I was MOST PLEASED with Dr. Ham was that he presented some great scientists to the audience who were solid believers AND he did not shrink back from presenting the gospel.

You can go back to the original publication of Darwin's "Origin of the Species" and find a dividing line that has forever changed the nature of the relationship of reason and faith. Both Christians and non-Christians have failed often in a reasoned response to this theory and document.

And the biggest problem is that the major philosophical pillars that must be put down BEFORE the arguments can actually take place takes a ton of time.. and we are too rash and impatient to ferret it all out.

The human condition is so interesting... two men can look at the same empirical evidence and come to totally different conclusions. Each one looks at the other and shakes their head as to why their opponent can't see that their argument is rock solid.

Here are the questions that I ask, and very few in this debate consider them valid...

Q2 Young earth theologians talk about the problem of death before sin...but could the curse in Genesis be merely 'spiritual death' or 'God-kind death'? Man was already given 'dominion'...fish, livestock, creeping things- he was free to work the garden.. in the original mandate- did man have the ability to dig up trees, or did the livestock step on ants? Don't shoot me... but there is natural death and there is spiritual death... couldn't we have one without the other in theory?

Q3- Moses is writing Genesis as dictated by the Lord. Could it be that God is communicating to him TRUTH..but in an accommodated structure that communicates to the people at the time in parallel structures to how they understood the world at that time? Moses was trained with an ancient Egyptian education... could it be that God parallels that knowledge to communicate what is important without violating truth?

Q4- to the naturalists... no doubt that slight successful changes take place as environmental changes take place in living creatures...but is it rational to extrapolate that as proof for the variety and design of life as we now find it? To me, the least likely part of the evolutionary origin theory is the RANDOMNESS of it all. SO a cosmic lottery took place and we have beauty, variety, love, language, logic, and moral laws? To me, that takes more faith than to believe in a designer.... information from non-information and life from non-life is a greater 'miracle' if you ask me.

I have written on this topic before: My Good Nature Views Are Evolving
And if I am honest, I always hold an openness to listen to competing philosophies

Here was my greatest concern coming from the debate. Both men sought to undo the other sides argument as expected. Ham believes that allowing only a naturalistic view in the classroom is wrong and Nye believes that Ham's views are dangerous to children.

But did you feel the chill in the air from one side?.. I did

I got the impression that Ham believes the naturalistic view of origins are wrong, but I don't see him wanting to outlaw their right to be held or articulated.

I felt the chill of Nye's side... they want the ideas stamped out... Ham's views are dangerous... and I know that if that group of elites ever got the totalitarian power they want what the result would be... and that is what frightens me..... ideas have consequences......

To me..these guys got it right...but few in evangelicalism followed...

Princeton received “Origin of the Species” with great interest in 1859.

In 1862, Charles Hodge noted Darwin’s own admissions: “his frank admission of  the difficulties of the theory and in the absurdity of its conclusion”.

Hodge’s main problem with Darwinism was its commitment to random chance and not directed by God.

According to Hodge, the fatal flaw of Darwinism is the denial of design in nature. “If you deny design,you in effect deny God. Darwin says he believes in a creator, but if the creator, billions of eons ago, called a germ in existence and abandoned its development to chance has pretty much consigned himself to non-existence. So what is Darwinism? It is Atheism.”

As I close this post... please take note of quotes I use when discussing the foundations of these issues:

IRREDUCIBLE COMPLEXITY:
In Origin of the Species, Darwin stated,

“If it could be demonstrated that any complex organ existed, which could not possibly have been formed by numerous, successive, slight modifications, my theory would absolutely break down. But I can find no such case.”

RELATIONSHIP OF SCIENCE AND THE BIBLE:

Hodge: “Science has taught us, the church, a lot about the Scriptures”
Archibald Alexander: “Science and the Bible are allies in establishing truth. God is author of both revelations. The truth has nothing to fear from the truth”.
Hodge: 2 FOLD EVIL
Evil of Science- Formulating theories that ignore Biblical truth
Evil of Church- Persisting in interpretations that conflict with well established objective truth

IF NATURALISM/ATHEISM IS TRUE:
“In the enormous scene of the universe- amid the whirl and hiss of jagged iron wheels- amid the deafening hammer blows- man, a helpless and defenseless creature, finds himself- not secure for one moment- any second an imprudent wheel may seize and rend him, a hammer may crush him to a powder- and worse- the sense of abandonment is awful.”  David F. Strauss

ADVANTAGES OF BIG BANG:
“If time's beginning is concurrent with the beginning of the universe, as the space-theorem says, then the cause of the universe must be some entity operating in a time dimension completely independent of and preexistent to the time dimension of the cosmos. This conclusion is powerfully important to our understanding of who God is and who or what God isn't. It tells us that God is not the universe itself, nor is God contained within the universe.”
Hugh Ross

WHAT EVOLUTION ACTUALLY PROVES:
M.I.T. physicist Geoffrey Schroeder correctly points out in his analysis of the impressive display and tribute to evolution that is found in the Natural History Museum in London. “It is all impressive. Impressive, until you are able to walk out and reflect upon that which they are able to document. Daisies remained daisies, moths remained moths, and cichlid fish remained cichlid fish”.
(The Science of God pg. 31).

MY PRAYER IS THAT honest science and a high view of the Bible will continue to be allies and not divide us.

By the way- very pleased with the great tone NightLine used in reporting on this: