Going Forward When Everything Screams Stop 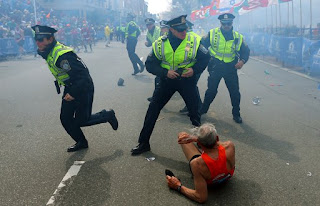 Over and over again yesterday, like reliving a bad dream, I watched video of the bomb going off at the finish line of the Boston Marathon.

Each time my eyes focused on an elderly man, just yards from the finish line, in a bright orange running shirt- knocked down by the concussion of the blow or maybe even a victim of shrapnel.

Today I learned his name- Bill Iffrig, 78 a retired builder who was running his 3rd Boston.

The picture posted on this blog was a lead photo in a number of news sites, I just stared at it for a solid 6 or 7 minutes. When tragedy strikes, there are always heroic responses. Seeing the full detail and resolve of the Boston policemen and women is motivation enough.

Bill Iffrig got up and finished the race.

Not only that, he found his son who was waiting for him, and they walked back to his hotel room about a half mile away.

This 2009 Washington Herald's Man of the Year- did what he was trained to do- finish. Move forward when everything was screaming to quit.

Where does that come from?

News reports say that Bill began running in the 1970's. I see where he was going to finish yesterday's race in just over 4 hours. Elite marathoners or accomplished distance runners may not even blink at that. But I'm thinking "78!" not only is he a qualifier and three time finisher- but he is pushing a great pace for those 26.2 miles!

The long hours.. the grueling training- fighting pain and discouraging injuries. Being on a road all alone with no one to keep you going. Hearing an inner voice that says 'slow down and walk' but learning how to say 'No' to those cries- marathoners know those moments.

No matter how good they are- a marathoner will hit the wall when every fiber of their body says "Quit"- but the ones who finish learn to say 'march on' no matter what.

People will say how 'brilliant' the evil person or persons who did this were to move in, pass by, and get out while hurting such a soft target.

I say those evil perpetrators are actually stupid.

They picked on some of the best people in our society and will lose.

I predict a record turnout on Patriot's Day 2014- in both runners and spectators.

I already imagine someone finishing on a prosthetic, defying the odds of recovery from yesterday's carnage.

The terrorist messed up- he picked the wrong city, wrong event, and wrong target.

A terror event is meant to paralyze a people into fear and hiding.

But marathoners don't know how to quit and they won't.

As Americans- we need to dig deep down and find that same resolve to get up and finish well.

They won't win because we never say 'quit'.

I'm going to pray and serve and run a little harder today.... how about you?