The Time Will Come- Observations of Ezekiel 12


Ezekiel 12"21 Again a message came to me from the LORD: 22 "Son of man, what is that proverb they quote in Israel: 'Time passes, making a liar of every prophet'? 23 Give the people this message from the Sovereign LORD: I will put an end to this proverb, and you will soon stop quoting it. Now give them this new proverb to replace the old one: 'The time has come for every prophecy to be fulfilled!' 24 "Then you will see what becomes of all the false visions and misleading predictions about peace in Israel. 25 For I am the LORD! What I threaten always happens. There will be no more delays, you rebels of Israel! I will fulfill my threat of destruction in your own lifetime, says the Sovereign LORD." 26 Then this message came to me from the LORD: 27 "Son of man, the people of Israel are saying, 'His visions won't come true for a long, long time.' 28 Therefore, give them this message from the Sovereign LORD: No more delay! I will now do everything I have threatened! I, the Sovereign LORD, have spoken!" 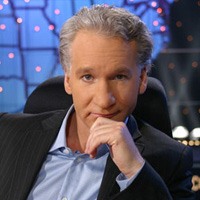 I finally got around to viewing "Religulous', Bill Mahr's scathing attack on all things religious which was produced in 2008. Not a whole lot to it, though I think for a documentary it was very well done and did make a good attempt to entertain and persuade.


All men collect information and use information based on powerful internal intuitions called 'presuppositions' which are developed continuously throughout our formative years and beyond. The most interesting aspect of Mahr's movie is that we get a glimpse of his presuppositional view toward the church that is a combination of a mixed family (Judaism/Catholicism) and his study of the tenants of religion, including a lot of intellectual issues stemming from his understanding of the epistemology of religious truth in a culture that is heavily influenced by science and the enlightenment.


This movie puts more of a human touch in terms of my understanding of Mahr, and I feel a sense of empathy for anyone heavily entrenched in skeptical viewpoints. They are well trained and well supported in their peer group. I have to equally acknowledge presuppositional views and peer group support as well.


It would take a long time to go back through some of my core foundational philosophy in terms of apologetics. But the documentary has some inherent flaws.


The first one is that it is a mistake to lump all religious views together to broad brush all as 'ridiculous'. I have written before:


I do want to make it clear that to treat all faiths as equal is the most improper presupposition of our post-modern carnage. All religions are not the same. They have different systems and practices. I do believe that jihadist Islam poses a violent danger to our world today. All religions have the possibility of perpetrating great oppression and harm. One has to look no farther than the Crusades to see the destruction that misguided human beings can cause in the name of religious belief.But even in the case of the Crusades, there are fundamental differences in belief.The Crusades demonstrate followers of Islam doing what their faith requires them to do and followers of Christ ignoring what their Savior requires them to do. The Crusades represent Islam at its best and Christianity at its worst.

Thursday, January 11, 2007, jayopsis.blogspot.comI Am the Most Dangerous Man in the World?

The low blow in the movie by Mahr was to attack the truck drivers' chapel. He hit these men with questions that they had never been trained in. I agree that it is good for all Christians to pursue answers to questions. But not knowing all the information does NOT limit these men to experience God by means of the gospel. Jesus Himself described the kingdom of God as a humble, child like acceptance. No one can know all the ways of God.These men could experience God and humbly enter into a relationship with God through repentance and faith without knowing all the debate points. We all turn a car key and the engine starts- some know every detail about the car and some just drive. Some know the engineering and some just steer and brake. But all use the vehicle in the same way.

So I can't answer any of Mahr's challenges when it comes to Judaism, Mormonism, and even some doctrinal differences of Catholicism- but he can find answers to the questions he has about Biblical concerns, if he would look to those who have committed their time and life discovering those things without abandoning their faith.

Some of the biggest issues about evangelical Christianity were raised in the film by Mahr's visit with Dr. Ken Hamm and the Answers in Genesis ministry.

I understand that the skeptics so easily discount young earth theories based on their understanding of science. But here I would be most careful if I were a skeptic. The understanding of time and theories about the formation of the cosmos are the most speculative of all the scientific theories. Mainly because we are limited in our ability to observe change over time.

One geologist looks at the grand canyon and says, 'Of course, this had to take millions of years".


I was on the beach last week and had a fun time in the surf and sand. One evening a storm surge came in and I walked out on the beach the next morning. I was looking at a 'miniature grand canyon'. What was a flat landing the afternoon before, was now a 6 foot 'cliff' with beautiful patterns in the sand. It looked like the grand canyon.


I looked at that and said- WOW- a big enough surge of water and you could have the grand canyon in a very short time.


I have written a lot on young earth vs old earth Christianity- both camps have men of great faith and ministry. Even if you could PROVE the timing of the creation account, it would not change the crux of the Christian message which is all about the life, claims, actions, death, and resurrection of Jesus Christ.


I am NOT a scientist- I do know there are MANY intellectuals/scientists/philosophers who accept the credibility of Christianity. There are more intellectuals who have stood firm on the reliability of the faith than those who have rejected it. And my basic premise has always been that these are not matters of the brain- they are matters of a stubborn, resistant, unyielding, prideful, and sinful heart.


There are brilliant, highly educated people who still accept the miraculous claims of Scripture. The ONLY miracle Christians really believe in is "In the beginning, God". Once you have a great Uncaused Cause, the narrative that follows is plausible. Biblical faith is not incredulous.


The bottom line: this passage in Ezekiel makes a shuddering promise. Though the men of an age mock God and say, 'Where is He? He is not real!' , there will be a day where the door of mercy is closed and God will have to judge.


I see this in my job. I will have a student who comes to me and no matter how I reason, or 'threaten' to finally bring consequences- they do not change. And that day comes where time has run out, I have tried educating and reasoning- but now all I have left is a detention, a saturday school, suspension, or expulsion.


These students usually are the most explosive when I finally land on them (and even sometimes the parent is equally angry). They truly do not understand that when I said I would do something, I meant it. Now my integrity is on the line.


Some students never turn even as the consequences become more painful. They are the ones that hurt my heart, because I worry about what they are heading into when the penalties are real and lasting.


So I cry out for men like Bill Mahr. Even with all the mocking and all the rebellious sin- Jesus Christ's death can satisfy God's holy and righteous wrath. All he has to do is humbly bow his knee and yield.


Most likely, Mahr will shake his fist to the grave. For anyone to change takes a great miracle, but I will keep praying for that miracle.


But then- after life or time has ended- we will know. Eternity is too big a gamble for me to trust in my presuppositional loaded logic. I am trusting God to take care of that.