The Only Way to Lose is to Quit 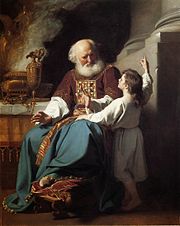 Monday's are tough- but this one seems tougher. All this rain and fatigue are working against me.And I'm thinking about Samuel this morning. Of course, I can't help thinking about one of my joys as a dad, reading a little children's book to my daughters and having them laugh when I said, "SAMUEL" recounting the Lord calling him when he was 12.

Here we find Samuel...old.... years of frustrating ministry. He was against a King, but the people's stubborn will has prevailed. And Samuel has given them what they want- a tall, handsome warrior King named Saul. The people think 'Now we will be happy'- Samuel knows the outcome already, he has seen it over and over and over again.

SO here is Samuel's address to the people:

12
1 Samuel 12
Samuel’s Farewell Address
[1] And Samuel said to all Israel, “Behold, I have obeyed your voice in all that you have said to me and have made a king over you. [2] And now, behold, the king walks before you, and I am old and gray; and behold, my sons are with you. I have walked before you from my youth until this day. [3] Here I am; testify against me before the LORD and before his anointed. Whose ox have I taken? Or whose donkey have I taken? Or whom have I defrauded? Whom have I oppressed? Or from whose hand have I taken a bribe to blind my eyes with it? Testify against me and I will restore it to you.” [4] They said, “You have not defrauded us or oppressed us or taken anything from any man’s hand.” [5] And he said to them, “The LORD is witness against you, and his anointed is witness this day, that you have not found anything in my hand.” And they said, “He is witness.”
[6] And Samuel said to the people, “The LORD is witness, who appointed Moses and Aaron and brought your fathers up out of the land of Egypt. [7] Now therefore stand still that I may plead with you before the LORD concerning all the righteous deeds of the LORD that he performed for you and for your fathers. [8] When Jacob went into Egypt, and the Egyptians oppressed them, then your fathers cried out to the LORD and the LORD sent Moses and Aaron, who brought your fathers out of Egypt and made them dwell in this place. [9] But they forgot the LORD their God. And he sold them into the hand of Sisera, commander of the army of Hazor, and into the hand of the Philistines, and into the hand of the king of Moab. And they fought against them. [10] And they cried out to the LORD and said, ‘We have sinned, because we have forsaken the LORD and have served the Baals and the Ashtaroth. But now deliver us out of the hand of our enemies, that we may serve you.’ [11] And the LORD sent Jerubbaal and Barak and Jephthah and Samuel and delivered you out of the hand of your enemies on every side, and you lived in safety. [12] And when you saw that Nahash the king of the Ammonites came against you, you said to me, ‘No, but a king shall reign over us,’ when the LORD your God was your king. [13] And now behold the king whom you have chosen, for whom you have asked; behold, the LORD has set a king over you. [14] If you will fear the LORD and serve him and obey his voice and not rebel against the commandment of the LORD, and if both you and the king who reigns over you will follow the LORD your God, it will be well. [15] But if you will not obey the voice of the LORD, but rebel against the commandment of the LORD, then the hand of the LORD will be against you and your king. [16] Now therefore stand still and see this great thing that the LORD will do before your eyes. [17] Is it not wheat harvest today? I will call upon the LORD, that he may send thunder and rain. And you shall know and see that your wickedness is great, which you have done in the sight of the LORD, in asking for yourselves a king.” [18] So Samuel called upon the LORD, and the LORD sent thunder and rain that day, and all the people greatly feared the LORD and Samuel.
[19] And all the people said to Samuel, “Pray for your servants to the LORD your God, that we may not die, for we have added to all our sins this evil, to ask for ourselves a king.” [20] And Samuel said to the people, “Do not be afraid; you have done all this evil. Yet do not turn aside from following the LORD, but serve the LORD with all your heart. [21] And do not turn aside after empty things that cannot profit or deliver, for they are empty. [22] For the LORD will not forsake his people, for his great name’s sake, because it has pleased the LORD to make you a people for himself. [23] Moreover, as for me, far be it from me that I should sin against the LORD by ceasing to pray for you, and I will instruct you in the good and the right way. [24] Only fear the LORD and serve him faithfully with all your heart. For consider what great things he has done for you. [25] But if you still do wickedly, you shall be swept away, both you and your king.” (ESV)

This is a painful proclamation for the prophet.
It has to sting his pride as he sees the juxtaposition- He is 'old and gray' where Saul is young and vibrant. Samuel has lost. Samuel's sons- the ones he hoped would rule- are rejected.

Samuel almost seems negative and sarcastic- What did I do to end up in this state of humility? Did I defraud you ever? I was the miracle child- I am named "God has heard", I have led you well in peace and spiritual progress. Your decision for a King is not being made in Holy wisdom- it is sinful fear and envy.

But Samuel doesn't give up. He is found to be faithful. He doesn't like the situation that God has allowed- but he doesn't give up on God. He praises Him. He follows Him. He keeps fulfilling the work he has been called to do.

We have to admire this!

Have you ever been disappointed in the way things turned out? How do you respond?

It hurts. You pour your heart and soul into something. You pray continuously. You work according to all the principles that are right and good. Years of pressing and perseverance- and then..... it goes in a totally wrong direction. The prayers are finally answered- but the answer is NO.

So what do you do?

This is where Samuel is a hero. What did he do? He kept going.

His faith in God is not diminished. The painful circumstances are not attributed to anything deficient in his God.

He keeps his heart for the people. And I see a key reason why. If we ever serve people to get the motivation from the people, we will always be disappointed. Samuel ministered to the people as a service to God.

Notice that he does not water down the message- he stands boldly and firm in the same message he has given since he was a young prophet.

"Follow the Lord and he will bless you- turn from Him and you will suffer."

And history will show that Samuel was right and that God was right. The King that the people press for will cause much misery and heartache over time. Samuel is right.

But God is right. The King will make way for the next King... a man after God's own heart. And that King, David, pre-figures the King of Kings.

So what do we do when we feel beat down and all seems lost?

1) Keep serving and ministering and never cease praying for people regardless of the circumstances.
Love is the route out- keep loving and serving.

I think it is especially important to keep praying for people who intentionally or unintentionally hurt you. It is a sweet service to God to do so.

2) Trust the God is IN CONTROL. And He is trustworthy. "He listens and we are heard" which is what Samuel's name means.

3) Stay in the Word of truth. The message does not change in the up and down turmoil of life.

4) Bottom line: The only way to lose is to quit.

This should pick me up on a Monday- I hope it helps you!