My Struggle to Submit 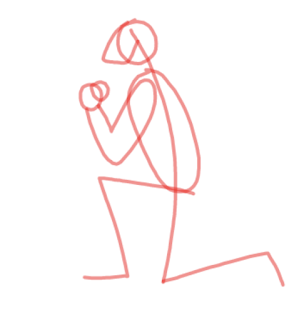 God has a serious sense of irony. He never uses it in a trivial way. As humans, our use of sarcasm is almost always tainted with the sin of selfishness with intents to tear down or, sadly, a pitiful stretch for entertainment. God uses His holy sarcasm as a Divine Surgeon cutting the cancer of our souls. I can't help to notice that familiar tone at times in Scripture. But we can never throw stones of accusation because we know His motives are pure and He acts within the confines of unadulterated truth.

God also uses the circumstances in life to flesh out real life instances of irony. It is a not so subtle way at times to put us in proper perspective and remind us that He is intimately with us at all times.

Often, in my life, he uses my 'teaching' as prime real estate to poke and prod the decay and deserts in my soul. He compels me to write, so I can step out and analyze the message... not for you.. for me. Not only for now, but again a few months or years later when I have completely forgotten these thoughts. I read things I have written in the past and, most of the time, wish the thoughts were more a part of my daily DNA.

So I'm back with Peter... now teaching it every Sunday to a virtual, zoom, Sunday School class. It is by far the most difficult teaching environment I have ever encountered.

I knew the passage was coming.... the one I struggle with... the one that my soul pushes against.... and I am back wrestling with it, but with the added pressure of teaching it to a Brady Bunch screen of smiling faces and wondering if I am even coming through... or whether I am flickering in and out.

It dawned on me this week that Peter haunts my heart. When I read Paul, he engages my mind. The Holy Spirit lays it our like a legal argument... the reasons are so clear and applicable. But when I read Peter, he pulls at my heart. The two men are solid and unified... evidence that the true author is the Holy Spirit. The content is down the line, absolutely the same.

But Peter's words go beyond the argument and tug at my emotions and motives.

When I read Paul, I write nice, alliterate points of application.

When I read Peter, I see 'movie moments'... layers of his life that are intertwined with human struggle and the stories of his time with Jesus.

So I am preparing this morning to take on PART 2 of my lesson from 1 Perter 2... the call to submit.

[13] Be subject for the Lord’s sake to every human institution, whether it be to the emperor as supreme, [14] or to governors as sent by him to punish those who do evil and to praise those who do good. [15] For this is the will of God, that by doing good you should put to silence the ignorance of foolish people.

[17] Honor everyone. Love the brotherhood. Fear God. Honor the emperor.

[18] Servants, be subject to your masters with all respect, not only to the good and gentle but also to the unjust. [19] For this is a gracious thing, when, mindful of God, one endures sorrows while suffering unjustly.

After showing Christ as the example, Peter keeps going....

[1] Likewise, wives, be subject to your own husbands, so that even if some do not obey the word, they may be won without a word by the conduct of their wives,

[7] Likewise, husbands, live with your wives in an understanding way, showing honor to the woman as the weaker vessel, since they are heirs with you of the grace of life, so that your prayers may not be hindered.

[8] Finally, all of you, have unity of mind, sympathy, brotherly love, a tender heart, and a humble mind. [9] Do not repay evil for evil or reviling for reviling, but on the contrary, bless, for to this you were called, that you may obtain a blessing. (ESV)

So my pushback comes instantly...

I watch the news, why should I submit in a culture that is increasingly becoming hostile to people of faith?

What about times to disobey... civil disobedience?

Does a wife have to submit to spousal abuse?

Do servants have no right to seek freedom?

How did we ever get to the point of fighting the Revolutionary War if we submit to this attitude?

Won't the world just walk all over me?

The world isn't just going to give stuff to you... you have to fight for it!

I have to fight for my family!

Of course I can find in Scripture times to fight evil and disobey- Paul and Silas were put in prison because they wouldn't obey the authorities when asked to stop speaking of Jesus. Daniel's friends were thrown in a furnace and Daniel was cast in the Lion's Den for their unwillingness to submit...... So am I over analyzing this?

No... not over analyzing.. just not realizing that this isn't a reasoned defense of when to practice Civil Disobedience... this is a call to shred the heart of pride.

With God... we willingly submit and therefore will escape the eternal subjugation.

Peter had already alluded to it... there is a Stone that you either give way to or It will crush you.

So here it is,... very clear... though it is complicated and messy... we are to humble ourselves and defer to others, because that is how God best sows seeds of reconciliation and salvation. God opposes rigidity. He wants us to stay compliant and malleable.

And not just here... this is all the way through Scripture:

Jer. 29:7- But seek the welfare of the city where I have sent you into exile, and pray to the Lord on its behalf, for in its welfare you will find your welfare.
And even in Peter's life....
remember that dark night in the Garden of Gethsemane?
John 18:10–11
[10] Then Simon Peter, having a sword, drew it and struck the high priest’s servant and cut off his right ear. (The servant’s name was Malchus.) [11] So Jesus said to Peter, “Put your sword into its sheath; shall I not drink the cup that the Father has given me?” (ESV)
Matthew 26:52–54
[52] Then Jesus said to him, “Put your sword back into its place. For all who take the sword will perish by the sword. [53] Do you think that I cannot appeal to my Father, and he will at once send me more than twelve legions of angels? [54] But how then should the Scriptures be fulfilled, that it must be so?” (ESV)
and later... after the denial... after Christ reappears and restores him....
John 21:18–19
[18] Truly, truly, I say to you, when you were young, you used to dress yourself and walk wherever you wanted, but when you are old, you will stretch out your hands, and another will dress you and carry you where you do not want to go.” [19] (This he said to show by what kind of death he was to glorify God.) And after saying this he said to him, “Follow me.” (ESV)
Follow Me.... He is asking for my submission... not when it is fun and easy... NO- He wants me to walk with Him in the darkness... not just the darkness of an evil world, but the darkness of my lack of understanding....
Pray for me in this area...
The Principles of Submission:
God wills it
It is for His sake and for His kingdom
It glorifies God
It silences the enemies
It is the fertile ground of love and reconciliation
It demonstrates complete confidence in the Sovereignty of God
It demonstrates who is the king on the throne of our hearts
It properly humbles us and directs us
It allows us to escape eternal subjugation
It is hard, messy, and complicated.. because at times, we have to choose and discern
The question is... not how little I can do this... but HOW MUCH can I do so.
Does anyone know the 2nd best selling novel of the 19th century? The best selling book was the Bible... but what was #2?
It was a novel that has been quite forgotten and cast down.... it is known now in a negative context which sadly hides the beautiful truth buried now in centuries of misunderstanding and attack.
The novel is 'Uncle Tom's Cabin' written by Harriet Beecher Stowe and published in 1852.This novel is credited as being a major influence in helping abolitionists in their quest to end slavery in America.
The main character, Uncle Tom, may be the best personification of the principle of submission in all of literature. Here is how wikipedia describes the main character:
Uncle Tom, the title character, was initially seen as a noble, long-suffering Christian slave. In more recent years, however, his name has become an epithet directed towards African-Americans who are accused of selling out to whites. Stowe intended Tom to be a "noble hero" and praiseworthy person. Throughout the book, far from allowing himself to be exploited, Tom stands up for his beliefs and is grudgingly admired even by his enemies.
In one of the most riveting parts of the novel, Tom is sold at auction to a vicious plantation owner named Simon Legree and taken to rural Louisiana. Legree begins to hate Tom when Tom refuses Legree's order to whip his fellow slave. Legree beats Tom viciously and resolves to crush his new slave's faith in God. Despite Legree's cruelty, however, Tom refuses to stop reading his Bible and comforting the other slaves as best he can. Tom is not a weak sell out... He is a strong testimony to a man who loves the Lord and lives out I Peter 2.
It is the nobility of this fictional hero that so moved Americans who read the novel. There is a famous (though likely anecdotal) story that when Abraham Lincoln met Harriet Beecher Stowe, he said 'so you are the little woman who wrote the little book that started this great big war."
But today the novel is hated...And that is always a problem when seeking to live counter culture, for the sake of the Lord.
There are always critics.... remember Job's wife?
Then his wife said to him (Job), “Do you still hold fast your integrity? Curse God and die.” (Job 2:9 ESV)
But we are being commissioned to submit to the King.... even when it is hard or seemingly illogical.
And we may even seem inconsistent when we disobey a command because we understand it to be contrary to the kingdom of our allegiance.
May God's grace guide us in the journey.