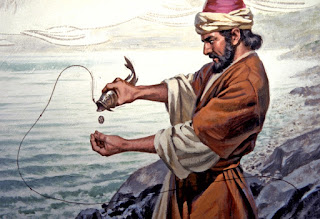 It was good to take a few days off to read, study, and pray. Coming back to this book was good. I have truly been impacted by these great words from Peter.

I went fishing, and during that time I spent a lot of time thinking about Peter and that life. He walked away from it and I am sure at times he missed it.

The life Jesus called him to was not easy, and though Peter had many failures and trials, he never quit. Peter was loud, brash, and quick to act. But he became submissive and wise. He simply lived life in full view of the suffering of His Savior and to him, it required a life of service to his Master's kingdom.

I get the feeling that the time is coming where we are going to be called to choose. And we will be persecuted for that choice. I pray for revival.... but regardless, we need to pay closer attention to what Peter is saying here:

[13] Now who is there to harm you if you are zealous for what is good? [14] But even if you should suffer for righteousness' sake, you will be blessed. Have no fear of them, nor be troubled, [15] but in your hearts honor Christ the Lord as holy, always being prepared to make a defense to anyone who asks you for a reason for the hope that is in you; yet do it with gentleness and respect, [16] having a good conscience, so that, when you are slandered, those who revile your good behavior in Christ may be put to shame. [17] For it is better to suffer for doing good, if that should be God's will, than for doing evil.


Apologetics is the discipline that deals with a rational defense of Christian faith. It comes from the Greek word ‘apologia’ which means to give a reason or defense. It is the word translated "to make a defense" in I Peter 3:15.

“in your hearts honor Christ the Lord as holy, always being prepared to make a defense to anyone who asks you for a reason for the hope that is in you; yet do it with gentleness and respect.”

I taught apologetics to high school seniors for 7 years. It is likely the hardest task I ever encountered and I made SO MANY mistakes along the way. Too many to even discuss in this blog post.

But sadly, my biggest mistake is losing touch with the CONTEXT of this passage.

We tend to think of apologetics as an intellectual debate in a college lecture hall, defending the philosophy of a Christian world view against an atheist.

This passage is in the context of suffering! Peter is saying to believers.... as they persecute you, burn you at the stake, feed you to lions, take away your means of earning a living.... live in such a way that people ask you... "Why do you have such peace and HOPE?"!

And if no one is asking me about my reasons for hope.... maybe it is because my life really does not reflect a radical obedience and a bold gospel message!

Every time I write or teach on an apologetic topic... my readership goes down and the boredom alert signal goes on high. I wish we had more solid theological lumber in our presentations, but there is little hunger for it... sadly.

But we do not really understand apologetics.....

One of the biggest issues in apologetics is the futility of reasoned arguments to non-believers. I Corinthians 2: 14 says, “ The natural person does not accept the things of the Spirit of God, for they are folly to him, and he is not able to understand them because they are spiritually discerned.”

Colossians 2:8 “See to it that no one takes you captive by philosophy and empty deceit, according to human tradition, according to the elemental spirits of the world, and not according to Christ.”

This leads us to some important foundations of defending our faith.

#1 The goal of a Biblical apologetic is not to win arguments, but be used of God to present the claims of Christ and His wonderful gospel. Evangelism and apologetics are very close.

#2 Reasoned arguments alone will not talk anyone into accepting the message of faith. We do offer answers for our hope, but we will not get discouraged if these answers are found to be unacceptable in the world’s eyes.

#3 We need to be as winsome as possible....." yet do it with gentleness and respect.”

I have seen a number of highly regarded apologists do more harm than good.... using truth as a blunt force weapon. That was one of my problems as a Bible teacher, I was so right... I was DEAD right and I won a lot of insignificant arguments, but slowly lost the war! Lord, please forgive me!

But here is some VERY GOOD NEWS from the Rock!

[18] For Christ also suffered once for sins, the righteous for the unrighteous, that he might bring us to God, being put to death in the flesh but made alive in the spirit, [19] in which he went and proclaimed to the spirits in prison, [20] because they formerly did not obey, when God's patience waited in the days of Noah, while the ark was being prepared, in which a few, that is, eight persons, were brought safely through water. [21] Baptism, which corresponds to this, now saves you, not as a removal of dirt from the body but as an appeal to God for a good conscience, through the resurrection of Jesus Christ, [22] who has gone into heaven and is at the right hand of God, with angels, authorities, and powers having been subjected to him. (ESV)

I count this as one of the weirdest passages in the Bible. It even puzzled Luther:

“A wonderful text is this, and a more obscure passage perhaps than any other in the New Testament, so that I do not know for certainty what Peter means.”

Here is a breakdown of the various thoughts on I Peter3:18-20

The irony is that Peter said Paul's writings were hard! Look at what Peter says in his 2nd letter:

And count the patience of our Lord as salvation, just as our beloved brother Paul also wrote to you according to the wisdom given him, [16] as he does in all his letters when he speaks in them of these matters. There are some things in them that are hard to understand, which the ignorant and unstable twist to their own destruction, as they do the other Scriptures. (2 Peter 3:15–16 ESV)

So we need to be careful here and not implant some strange or twisted rationale to what Peter means about proclaiming to the spirits in prison. They may be demons, or people in Hades,... but the text is too obscure to invent some theological angle.

I think the mistake we make is worrying too much about the mystery and that makes us miss what is in plain sight!

And here is what stands out:
For Christ also suffered once for sins, the righteous for the unrighteous, that he might bring us to God,

Christ was made 'alive in spirit' and 'proclaimed' to other 'spirits' in 'prison' because the 'formerly' did not obey.... when God's patience waited 'in the days of Noah (at the time the ark was being prepared)
in which a few (small, 8 persons) were brought safely through water.

Peter says this corresponds now in baptism which saves- not as a removal of dirt from the body, but an appeal to God (for a good conscience) through the resurrection of Jesus Christ.

And I do think a key is to notice what Peter says right after this in Chapter 4- sometimes the chapter breaks in the Bible disrupt the whole:

Always allow other passages to shed light on them. And there will be some things you won't ever know for certain. That is OK.

[29] “The secret things belong to the LORD our God, but the things that are revealed belong to us and to our children forever, that we may do all the words of this law. (Deuteronomy 29:29 ESV)

This is not a cop out by the way.... if you can explain EVERYTHING about God be careful.... that may be a god made in your image. My God has great mystery, yet I take comfort that I am made in His image. He is beyond me... and I am OK with that!

So here is my bottom line on this passage:

1) I really don't know what parts of this passage refer to. If I had to guess, it has something to do with Christ's spirit while the body of Jesus was in the tomb and possible corresponds to the part of the Apostles creed "He descended into hell". But it is too obscure to build any true narrative about.

2) Disobedience is nothing to play with. If we are not careful, we swim in the ocean of Christian liberty in grace and forget there are still sharks of consequence. We have been saved to do God's will and Peter will spend more time on that in I Peter 4.

3) Our salvation cost A LOT- the suffering of Jesus. When He asks us to submit as a citizen, as a servant, as a wife, as a husband.... it is NOTHING compared to what He did for us!

5) Christ's goal is to bring us, the UNRIGHTEOUS,  to God... acceptable and worthy. As the ark brought 8 people through the flood of judgement... the cross will bring some through the fire of God's wrath. Even Jesus said the road is narrow and the people are few... comparatively. Where are you on that journey?

Yes, there will be a LARGE number of people who will be saved from the fires of hell, but sadly, it is a small proportion compared to the whole of human existence.

God is patient... just as He was while Noah built the ark... but the rains came.
God is being patient again, as Jesus is building His church.... paid for by shed blood on the cross.

SO- arm yourselves with the same way of thinking, for whoever has suffered in the flesh has ceased from sin, [2] so as to live for the rest of the time in the flesh no longer for human passions but for the will of God.

Time is running out....... it is time for all of us to be sober and obedient to the will of God. Don't treat Jesus with disrespect.....

More on this when I write again.

Email ThisBlogThis!Share to TwitterShare to FacebookShare to Pinterest
Labels: John Piper, life of Peter, Look at the Book, winning edges by Jay Mathews