Saban vs Bryant? That Is As Ludicrous as Batman vs. Superman! 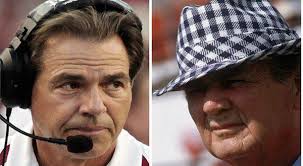 As many of you know - I try to post something about Coach Bryant on the anniversary of his passing away on Jan 26, 1983. The site I have dedicated to Coach Bryant is full of special memories.

SABAN VS. BRYANT? BATMAN VS. SUPERMAN?

In March of this year (2016) Warner Brothers will release a movie, "Batman vs Superman" that on the surface, seems to be a ridiculous title- but my understanding is that the storyline involves a conflict that ultimately results in the harmony and formation of the Justice League.

The confetti was still falling on Jan 11 after Saban's 5th national title when the talking heads began the debate on who is the greatest coach...Bryant or Saban? This is an equally ridiculous question, but I do understand the human need we have to compare, contrast, and debate. I have always joked that heaven may have a football planet where we get to play all those scenarios...  we have eternity...right?

But just like the movie (if I am right about the storyline), the debate ultimately leads to a unique harmony of what has made Alabama football a special place in my life.

WHY BRYANT HAS AN EDGE AND ANTICIPATING SABAN'S NEXT CHALLENGE

To save you some reading time- let me cut to the main point.

Coach Nick Saban has an opportunity to take on (as a competitor) his next great challenge and his hardest one. One that none of us would have the right to complain if he chooses to leave it or even fail to achieve it- and that is to survive the anticipated dip in performance.

I have no clue WHEN that may happen... but Coach Saban himself this year hinted that even he knows that it will come at some point..... and it will be a great challenge for him to stay the course.

Can you imagine what a Paul Finebaum show would sound like during that stretch?

We know the rest of this story- Alabama shocked USC the next season- went 11-1 and won the SEC, finishing #2 in the nation. That sparked the 1970's as Bryant's best decade.

IF- Coach Saban is able to persevere an inevitable dip ... and guide the ship through the hurricane of doubters and dissent.. and then find a conference or national championship after that... then he would silence all doubters.

In the end...does it really matter?

The problem is that regaining that 'winning edge' in this modern era poses more peril than ever before... and deep in my soul I always stand amazed at the passion and energy of Saban to continue to do it. A mortal man would take his money, trophies, and ride his grandchildren on his boat.

WHAT MOST FOLKS MISS- IT'S MORE THAN WINS

Now let me mention the HARMONY I find between the two coaches..... did you see it? It was on display... right on the Alabama sideline during the game.

Whenever former players feel comfortable coming around and want to come around- you know that a special culture is at work. Alabama's sideline at the National Title game was packed with many adoring former players. 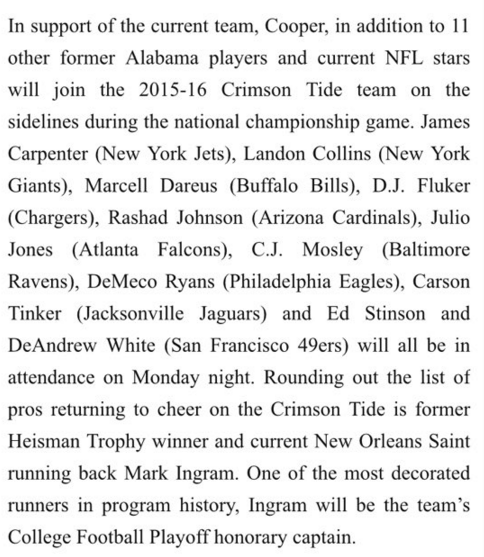 That is what both Coach Bryant and Coach Saban have in common. And the fact that Coach Saban has young men in such high regard of him in a generation that is more prone to mock and disregard elders... this is quite an achievement.

Coach Bryant towered in a day when it was more common to follow the leader no matter what.

But men followed him with such a passion that the bond still stays strong today.

Coach Saban has managed the same thing. But his ability to transcend generation, race, socio-economic differences, and regional differences is impressive!

Relationships matter.... and winning coaches know how to invest in their players in such a way that the players go through pain and persevere out of love and inspiration. 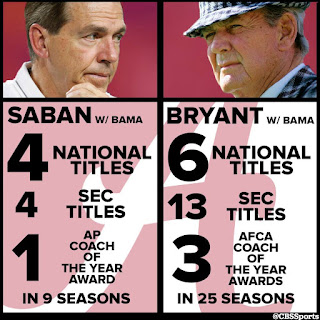 Football continues to display dramatic narratives and storylines- my favorite one is always the comeback story... someone who is cut down and counted out... but through perseverance and fight... finds victory once again.

It means a lot to me that Wade Phillips never stops fighting and builds a Superbowl bound defense.
I am also proud of Mike Shula and his work with the Panthers.
The personal stories this year are fun... Peyton Manning, Kenyan Drake, and I could go on and on....

When the Superbowl ends... then I will experience the winter of discontent.... but I also know that once again come August- the boys of fall will be dreaming again- everyone undefeated and expecting greatness.....