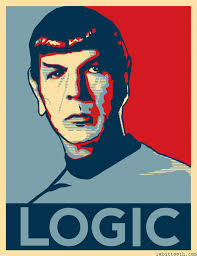 Have you ever considered the argument that the existence, recognition, and use of the laws of logic point to the reality of God?

The use of logic and the declaration of something as 'logical' or 'illogical' points to a pre-existent, unchanging, and prescriptive tool of evaluation and communication.

The laws of identity, non-contradiction, and the excluded middle- though sometimes misused with fallacy and faulty presumptions- point to a transcendent standard and come close to touching the mind and attributes of God.

In other words, if you use logic to argue against God, you are actually proving His existence because where would the universal standards of logic come from that you are using?

We use logic all the time, understand it, and point out when it is sub-standard in our rationalization.

We use it without ever considering what its origin might be.

It is harder to explain the existence of logic without the existence of God. Start with the materialist view of the universe- just matter- no personality- no plan- only time and chance in the future.

Were we just that lucky to have law, and language, and logic, and love come to be?

Was there this strange bug (like a spider) that accidentally had a silk thread came out of his butt and he thought "Hey I can use this to catch bugs?" I just need to know how to build it- and after 1 million years he perfected the geometric beauty of the web?

A final thought- they teach in math a concept called 'imaginary numbers' - (take the square root of a non positive number) it is labeled with an i- usually it is combined with a bi (b is a real number and i is imaginary).

So you say that God is imaginary- what if it is like an imaginary number- it has to be there to fill out the equation. In the variable above b is the man? and i is the mind of God?

I will stop there- the hard hearted will call me a fool and point out my sin and inconsistencies. I am a fool- but my King is a beautiful Being- I wish you would walk with Him for a little while.

You can reach out to Him today and say, humbly- "I want to acknowledge you as Lord today- would You show Yourself to me?" and then (I know this sounds silly) open the Scriptures (The Bible) and say "I think this is a silly book of human propaganda and myth, but I do humbly ask that You show Yourself to me- overcome my intellectual pride, rebellion, and skepticism- help me get over the hurts that men have caused- help me see beyond the churches failures- help me to see truth"- and then quietly wait as you read.


My prayer for you:
Father- You have shown Yourself to me in a powerful way- please do so for the one who would do this today" AMEN There is NO SIN that Christ cannot forgive you of-if you will acknowledge Him.
Posted by Jayopsis at 4/03/2016 10:16:00 AM