What Bobby Bowden Taught Me About Supporting Coaches Under Fire 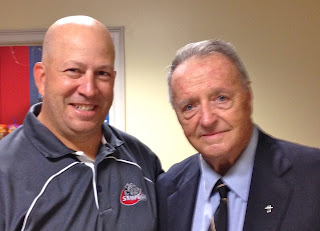 I was sad to learn about the passing of Coach Bobby Bowden this morning. I have been praying for him and was even lead to say a short prayer last night before going to bed. Coach Bowden has been intertwined in my life, loosely, for many decades. Part of it is his connection to East Lake, Ruhama Baptist Church, Roebuck Golf Course, my friend Terry Warren who is with Jesus, and of course football.

In that time I had 6 or 8 brief meetings with him and I was fortunate to speak with him in longer segments 3 or 4 times. We had him speak to students in our youth ministry in the late 1980's where he told his famous 'missing 1st base' talk and spoke of God's grace and Jesus as the only name given by which we can be saved.

As I was reflecting on my talks with him over the years, I couldn't help but think about the last time I saw him and the 4 or 5 minute talk we had on the campus of Samford University on Saturday Sept, 21, 2013 as he was being inducted into the Samford Hall of Fame. I was there to see my daughter, Julie, cheer for Samford. I had just bought a Samford shirt at the bookstore and walked down the hall to change into it. As I stepped out, there was Coach Bowden!

He wouldn't know me enough to remember me- so we had a quick reintroduction.... East Lake, Banks, Briarwood.... I mentioned I was a high school football coach. He asked a few quick questions and we talked about Terry Warren, (one of his All-Americans who had coached with me) and I mentioned in passing that I had been 'let go' from a head job in Nashville just a few years earlier.

Then he asked me how Coach Yancey was doing. Of course I told him how much I loved Coach Yancey and even then how I was sure he would be a Hall of Fame inductee down the road. But I also told him to pray for us, because the war drums of upset parents was beginning to beat.

We had gone 6-7 in 2012, and at that point in 2013, we had been beaten by Homewood the week before 38-14 and looked bad doing it. Even though the sun was shining that beautiful fall day... I was hurting. I was still hurting and recovering from being a coach who went through a public dismissal for lack of performance- and like a recurring nightmare, I was feeling those same things- upset parents, behind the scene conversations and criticisms, the spillover effect on the players, and the impact on preparation and performance. It is hard enough to win a football game, but almost impossible when doing it in contrary winds of doubt and division.

When I said 'pray for us', his whole demeanor changed- this was no longer a casual hello- Coach Bowden totally engaged and dug in. I think he may have seen my concern.

He put his hand on my shoulder, and spoke with great confidence with authority.

"Boy (he always called me that in almost every conversation), I sure will. Let me tell you something. There will alway be those calling for your job in this business. When you win, they are still there but can't be loud. But you start losing!

You keep loving kids, you keep trusting the Lord, and don't coach under pressure. The only pressure you need to feel is to coach for Jesus. Once you start coaching with pressure from the outside, you really aren't coaching well."

"Do you believe in Jesus, son?"

I replied with a smile- "Yes sir"

"Then you know that nothing can happen that He doesn't allow to happen. And all his plans are for good. Do you believe that?"

"Good, I will be praying for you and Coach Yancey. He is a great man. You support him and y'all keep fighting the good fight."

And that was it. The picture at the top of this post was taken right after that conversation.

I got a phone call during that time from a parent who was steaming mad. He had just been made aware that a group of very prominent dads had had a meeting and were discussing that it was time to make a coaching change. Two men stood up and walked out of that meeting upset that the meeting was even happening. One of them called the dad who had just called me.

Instead of being mad and afraid... I just felt the peace of trusting God.

"Thanks for supporting Coach. We all know he is doing a great job. Keep praying and keep fighting the good fight."

And that is all I did.

I knew that nothing can happen that He doesn't allow to happen. And all His plans are for good. I fully believe that. This doesn't mean I support secret meetings or those who spread negativity. I match that with confidence and good words.

And our administration stood strong.

From the time of that parent meeting to discuss a coaching change- Coach Yancey went 35-6 and added a state runner up title.

All of this has carried over to me as athletics director: I support our coaches. These are men and women who love the Lord, want to get better, and coach as a ministry. As long as they do that- I will support them, no matter the record.

I wish we would all support coaches... negativity and dissension work against a coach and their staff. Some coaches can get so beat up by the external talk that they are stripped of their power to lead and that is sad.

My general practice is to persevere and graduate the negativity and wait on the group that will embrace the positive values, practice a strong work ethic, and start new.

In the old days... a coach would come to a school and stay 40 years. During their tenure... they would have some winning seasons, some losing seasons, championships, and some really bad seasons. Back then, no one defaulted to firing the coach as the answer to issues. Not so today.

But thankfully, if you find a school who evaluates people and not records.... who believe in a staff approach, who champion coaching as a ministry, who believe in the sovereignty of God... a coach can be stable and supported as they go through trials of various kinds.

And that is my philosophy... not to say we don't push coaches to grow and improve... but they will always be given time and the decision to change a coach is made by administrators over many seasons, not parents... and definitely not a short cycle.

That is what Bobby Bowden taught me about supporting coaches under fire.

And he is with Jesus today.... free of pain, worry, doubt... that is the ultimate destination!