Book Review: The Last Christian on Earth by Os Guinness 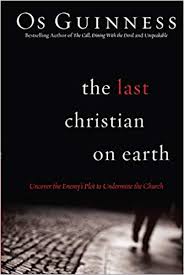 Update: I feel like I was TOO harsh in saying this book had too may issues but not enough solutions... I got weary at he end and didn't pay close enough attention... though the Evangelical Declaration at the end didn't float my boat.
It was one of those books that sat on my shelf too long, but God has the perfect ability to push it at the right time for me. How long though, is somewhat embarrassing.

I helped plan an apologetics conference at Christ Presbyterian Church in Nashville back in 2010 (or was it 2009?). It was an all-star lineup including Doug Powell, Dr. Nabeel Qureshi, and the keynote was by Dr. William Edgar of Westminster Seminary.

Dr Edgar encouraged me to get the book and I read the opening chapter... only to let it sit in my office through the transition to Birmingham in 2011.

I don't know what made me pick it back up.... and it took a few times to get back in thinking mode. But once I re-engaged, it created a wonderful experience of thought experiments.

The book was originally published under the title, The Gravedigger Files. It is a contemporary "Screwtape Letters" and uses the premise of secret memorandums within the kingdom of darkness to applaud the efforts of a spiritual deep state to disfigure and destroy the Christian faith.

It is a fun ride through the world of social criticism and has many quotable lines that Guinness writes himself, as well as his vast treasure of proverbs from many others.

I guess my only 'criticism' of the book is that it paints the problems well, comes across at times 'snarky', but doesn't spend a lot of time on real antidotes for individual believers who know all too well the problems... but don't know too well any solutions.

Here are some of my favorite quotes:

Evangelicals have become one of the shallowest, noisiest, and most corrupt parts of the Christian Church, bringing down an unprecedented avalanche of disdain on their heads- almost none of which has anything to do with Jesus.

Philistines throwing parties should be wary of Samsons who lean on pillars.

(on The Enlightenment/ Left of the 30's and 40's)- Yes, there was brilliance, but its darker side was the empty rhetoric, the hypocritical poses, the shabby compromises, the betrayal of friends and causes, with some people fellow-traveling with the Communists, and others more or less sleeping with fascism.... this kind of general mood became a more effective inoculation against faith than a hundred Voltairean arguments.

If you want to know what water is, why is a fish the last one to ask? attributed to an old Chinese proverb.

To the man with a hammer, everything is a nail.

There is no national God in America, but the executive branch is his prophet.

Anything as powerful as religion was bound to be commercialized.

In the age in which we now live, civilization is not an ideal or an aspiration.... it is a video game.

Politicians, it is now said, no longer run for office- they pose. But Christians too have become hooked, inhaling publicity like chain smokers, quite oblivious to the warning on the packet.

In matters of the spirit, nothing fails like success.

The customary parade of celebrities was passing across the screens, quick-tongued as ever, each one endorsing the Christian gospel with all the sincerity of a toothpaste commercial

Let your Jesus button shine before men that they may see your good graphics and glorify your P.R. team who live on Long Island.

See what I mean by 'snarky"!

Here is a paraphrase that effectively summarizes the entire book:

Under the impact of the modern world:

Privatization makes it merely a private preference, and

Pluralization just makes it one choice among many.

The title of the book is an excellent point... If the enemy can give enough people the intuition that "I am the last Christian on Earth" it will discourage the church from any visible effectiveness.

I encourage those who enjoy a sociologist's view of culture to dig in and mull over.

I also want to plug a podcast that Dr. Guinness did for law students at Pepperdine... here he does give some great antidotes at the end.

The thoughts in this book will definitely be in my January writing as I am plodding through some disappointment and disillusionment in 2020.

In the end though... the church will survive until the Lord's return. The statistics might not be great (only 2 of 7 were in good shape in the Book of Revelation)

The gospel is not thwarted. Jesus is still Lord of all and His kingdom will reign for ever and ever. I just don't know how long America will be a player in the game.

I found notes from 2010 when I started this book:

I'm going to paraphrase and comment on some of Os Guiness's book that was originally published under the title, "The Gravedigger Files (IVP, 1983). This is a little like C.S. Lewis' Screwtape Letters, but more direct and informational.

The problem with this blog is to differentiate Guiness's points of brilliance and my random rambling. So anything in BLUE (italics in facebook notes) and  is me- and if Guinness contradicts my BLUE... choose Guinness!

Memorandum 2 is a phenomenon labeled 'The Sandman Effect' and is presented as an enemy tactic versus the church.

In this tactic, the church digs its own grave while Christians sleep.

The major premise of the Sandman Effect is to infiltrate the church by use of culture- which exposes the defensive vulnerability of the church. Instead of the church becoming more aware of the damaging effects of popular culture, she falls into a deeper and deeper sleep.

The first experiment with this tactic is confusing the nature of belief. The impact of the enlightenment produced unexpected and unintended results.  The pomp and pressure of those who presented themselves as the intellectual elite offered much promise, but only produced exclusive caste systems and cynicism. The ultimate fruit of intellectual oppression is a quest for power and the greatest use of that power is cynical, dream killing, skepticism.

I love how Guinness describes this: "Yes, there was brilliance, but its darker side was the empty rhetoric, the hypocritical poses, the shabby compromises. the betrayal of friends and causes, with some people fellow-traveling with the communists, and others more or less sleeping with fanaticism...The legacy of this kind of general mood became a more effective inoculation against faith that a hundred (Voltaires)". The desire for truth went out of fashion..... which led the way for post-modernism which is not a clear philosophy... it is also a mood.

And here is where we (Christians, especially in the south) go wrong- we fail to see what has happened among those who are not the traditionalists. Traditionalists have a strong sense of right and wrong- they have a foundation of TRUTH.
But we are increasingly living among those (especially the young- media savvy- who tend to think by sight and act by impulse) who judge truth not by objectivity, but degrees of plausibility.

In Guinness's words- "we have created a climate in which a thing's seeming to be true is often mistaken for its being true."

And what is the means of this change? By changing the definition and standards of 'belief'.
We allow and even applaud people who believe or disbelieve on non-rational or psychological grounds. YOUR FEELINGS ARE VALID AND YOUR ACTIONS ARE JUSTIFIED BECAUSE THEY ARE PLAUSIBLE, EVEN IF THEY DO NOT CONNECT TO REALITY OR TRUTH.

I love Guinness's analogy here: we accept a person who is an atheist- not because they have weighed truth and fallacy- but simply because their father was a religious hypocrite who alienated the family from God as much as himself.

"Coach it with care and and plausibility will upstage credibility"- this is a scary statement.

The church has become a heart suffering from fibrillation - the rapid, irregular, and unsynchronized contraction of muscle fibers-
one spasmodic side is the Christian philosophers- who expound the theoretical- and the other meaningless motion is the 'just give me Jesus' anti-intellectual crowd who throw out doctrine.

Then Guinness shows how the Apostle Paul provides a framework for the fight. He knows that the church is the pillar and bulwark of truth... not theory. "Paul would have believed his faith was objectively true if he had been the last one convinced of it."
The truth of Christianity is NOT dependent on a strong church.. but a weak church hides TRUTH as it seems less credible, and a less credible church is a less plausible church.

A Two-Legged Stool: Guinness also shows how apologists only use 2 of three tools of analysis in unveiling this issue.
Leg 1- The history of ideas
Leg 2- The climate of culture and custom
and the missing...Leg 3- the justification of knowledge

In the post modern world- cultural pluralism and relativism offers confusion in leg 2 and the rapid flow and dynamics of information makes Leg 1 seemingly archaic and irrelevant (and BORING). But if we pressed more into Leg 3 and make the post-modern man justify his knowledge beyond the perspective of personal experience and evaluate truth claims in a more logical framework- we would see some progress and usefulness of the other 2 legs.

A huge roadblock in this mess is the frenzied pace of communication technology and global mobility. I love the quote about the Kenyan saying "All westerners have watches...  but Africans have time."

See how it works? Overlay upon overlay- the effect of molding lives through culture has all the advantages of a revolution and none of the disadvantages of intellectual sweat.

As our children see belief as a feeling of plausibility and relevance- as they are spun dizzy by infinite activity- as they are enticed by the promise of convenience- as they are distracted by new cool tools of transport of information tsunamis- they cannot understand that TRUTH is TRUE even if no one ascribes to it. 'When the Son of Man returns, will he find faith on the earth?' He won't, if we have lost what 'faith' means. What will He say when we respond "It just didn't 'seem' right... It didn't feel true"?

Father- we need help. We need to slow down- we need to read the WORD- chew it- meditate on it and mull it over- we need true WORSHIP to lift us out of the trivial pursuits and insulated hearts.
In short- we have loved things and ideas that have not loved us back. We live for pleasure while the King suffered and died.
Culture makes godliness seem strange, but without truth... justification of life is meaningless-
Our children need to see us forsaking our idols- because the idols will soon forsake them.
But we also need to train our children how to ask the right questions- make men justify their beliefs.... make them follow the consequences of their faith.....and Holy Spirit...PLEASE illumine the TRUTH.