Tempus fugit...time flies.. and right now it is at warp speed 7.

The marathon training is on schedule and I am relatively pain and injury free. The early morning runs have not been my favorite- but it is the only time I can do it.

I finished my last run of Sept this morning.. hated it because I woke up a full 20 minutes early.. and we hit the road at 4:45... dark and coolish..... 7 miles..which is the longest early morning run I am going to do..no time to stretch it until 8. 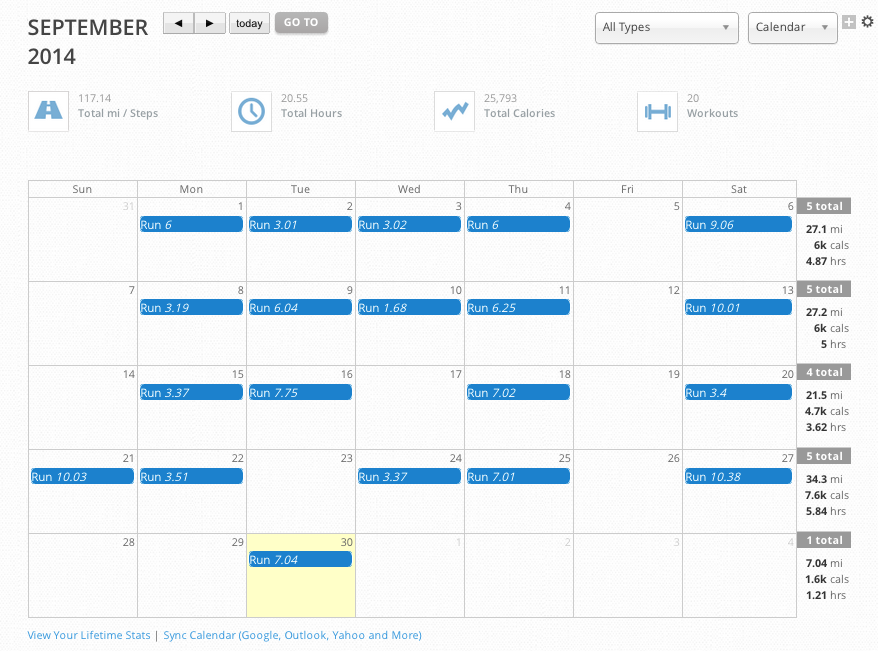 I don't think I have ever had a September over 100 miles...football is full swing... crazy! I am crazy!

On a fun note- the Monday night JV games have been great- we are 5-0 and it is a fun group to be with.

Varsity has struggled..in some ways we knew that this schedule and season was going to be tough each week and we are 2-1 in region play.

When momentum is good and wins are multiplying... the lubricants of a team run smooth. Most issues fade away into the happiness of winning.

But when you are struggling..all the other things.. relationships, trust, confidence aren't as fluid as they need to be.

This Friday night is one of those crossroad games- if we go into it a little healthier, a little more confident, a little more trusting, wiser... we can have a big win and get on a roll to some victories.

But just a little less in those areas- and we could be behind the 8 ball.

I am learning a lot in the midst of all this.

I finished my Sept. devotionals.... just trying to finish strong at this point.

When this year is done, I will know I put a lot into some big goals... difficult goals..

and so far I am staying the course.. 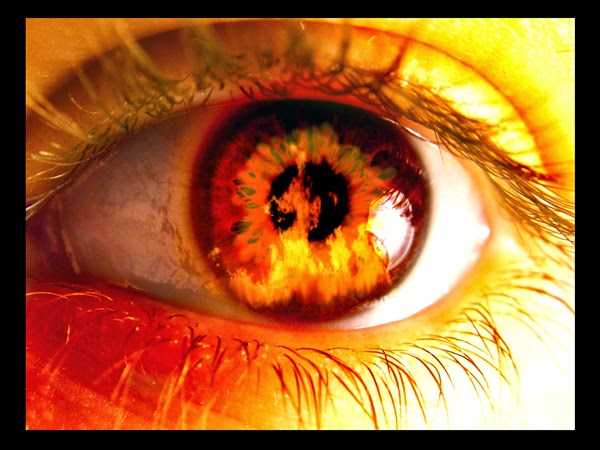 There is a character in literature that we sometimes call 'The Hemingway Hero". Based on some of Hemingway's characters and inspired by his life- the Hemingway hero is the man who just endures for the sake of enduring.

The Hemingway hero keeps pushing without virtue- there is nothing noble he strives for or believes in... he just does it. And in this tough consistency finds endurance for its own sake.

Hemingway wasn't the first one to capture this. Existentialists like Sartre and Camus built an entire philosophy on the benefits of perseverance and drive. No one can deny the power of 'contra mundum'- the fight against the grain.

Camus captured some of this in his famous essay, "The Myth of Sisyphus", using the greek fable to capture the man who continued to defy the gods and pushing that rock over and over again.

He ends the essay by stating:

I leave Sisyphus at the foot of the mountain! One always finds one's burden again. But Sisyphus teaches the higher fidelity that negates the gods and raises rocks. He too concludes that all is well. This universe henceforth without a master seems to him neither sterile nor futile. Each atom of that stone, each mineral flake of that night-filled mountain, in itself forms a world. The struggle itself toward the heights is enough to fill a man's heart. One must imagine Sisyphus happy.

As good as this sounds at the base level- and as much as this toughness is admirable (and rare) it fails to close the deal in terms of 'the abundant life'.

In fact, the final results of these views is the loss of happiness and hope. The grind of reality tends to make all men morbid and miserable. It is hard to enter the final stages of life with vigor, excitement, renewal, and energy. But do we HAVE TO end up that way?

I have always been saddened with how Hemingway ended his life. The irony is found in his short story, Indian Camp, published in in 1924. In this story, Hemingway captured the sadness of suicide through a young child, Nick, as he asks his dad, a doctor,  about the tragedy that had just taken place.

"Why did he kill himself, Daddy?"

"Do many men kill themselves, Daddy?"

Years later, Hemingway.. wealthy...famous..world traveler... adventurer... called his mom... he was desperate and depressed. He didn't think that life was still worth living.

"Why don't you just do what your dad did (committed suicide)."

And Hemingway took his favorite shotgun and ended his life.

Sisyphis, Camus, the Hemingway hero, Sartre... may have found power in the fight.. but in the end, the tragedy remains.

Is there another way?

I firmly believe there is! And one of my life's ambitions is to be found faithful to the pursuit.

I tell my football players that when I am watching film, I want to find unbelievable effort. Sometimes I say it like this... I want our next week's opponents to watch this film and say, "Look at the number ##- he has unbelievable effort!"

Can I live the same way? Is there an opportunity to continue in life, even as we age, to find passion and zeal for living?

Not only is this a noble pursuit... I believe it is one that pleases the Lord AND shines a bright light for Him!

I have broken it down into H words:

AN HONEST EVALUATION: Before I know where I need to go, I need to be honest and authentic about where I am. I have wasted so much of my life in pretense... trying to make myself look good. I heard someone say recently that executives at Google predicted that, in a decade, people will desire to change their name to distant themselves because they will be ashamed of their past social media escapades. But why try to hide the past? How do you know if you are improving? It is no shame to admit where you have been.. they key is where are you going? And the most honest evaluation I can make is....there is nothing natural in me to live this way.

A HOLY HELPER: Once I admit to finding nothing in me to aid in my quest- it makes me open to the Helper..God's Holy Spirit, Who is a seal of our salvation and a resident helper in our desire to find a fire for living. One of the Spirit's manifestations is to bring to remembrance the things we have been taught and the things that Jesus said. It is the Spirit Who breathed the words into the prophets and apostles and it is the Spirit Who enlivens the Word in our lives. Part of the journey is to be sensitive to His leading and being careful to not grieve Him or quench Him.

HARD WORKING: There is no progress without a steady, disciplined commitment to work. God is a worker, and man is called to work. Work is not part of the curse... the pain, sweat, thorns, and toil of work is part of the curse. Work is productivity. The body needs it, the mind needs it, the spirit of man needs it. This is an area of great improvement for me over the last 20 years. I find it is best accomplished according to a  big plan with daily tasks. Another key is to 'do it now'... don't procrastinate.

A HUMBLE HEART: This may be the biggest key of all. Humility begins with an understanding of 'I need help and I want to be ruled." There a basically two general heart dispositions...rigidity and pliability. The rigid heart is opposed to guidance and quick to rebel. It is full of pride and therefore sees no need to improve. The pliable heart yields easily to a master and follows his lead. That is why the Scripture says that God is opposed to the proud but gives grace to the humble (James 4:6).

A HUNGRY HEART: Humility is, in a sense, an emptying. And an empty heart is a yearning heart. If we see ourselves honestly and keep a spirit of humility and a daily work ethic...all of this will produce an eagerness to 'suck all the marrow out of life'. What if you approached every day with an excitement to learn, explore, and discover! The ones who seem too cool and casual think it is always 'been there...done that'. Life will soon ebb to a deadness if we keep that attitude.

HIGHER ASPIRATIONS: I once had a friend say, 'Aim for the stars... you may only hit the moon. But you hit the moon because you aimed high." I have long term goals that will carry me all the way to the end. Part 'bucket list' and part plain old heart desires... I have in mind what next steps look like. I am in no hurry... but I want a steady, marathon pace that reaches these milestones at the proper time.

HOPE: How can you live without hope? For the believer in Christ our end point goes beyond the end of life. I tell my football players to sprint 5 yards past the finish line.. don't ease up at the end. We need to do the same. I am running one more step past my last breath and heartbeat. And that step is into the arms of Jesus!

If you put all of these together, it could be summed up in one phrase.."STAYING CHILDLIKE".

This is what Chesterton noticed:

“Because children have abounding vitality, because they are in spirit fierce and free, therefore they want things repeated and unchanged. They always say, "Do it again"; and the grown-up person does it again until he is nearly dead. For grown-up people are not strong enough to exult in monotony. But perhaps God is strong enough to exult in monotony. It is possible that God says every morning, "Do it again" to the sun; and every evening, "Do it again" to the moon. It may not be automatic necessity that makes all daisies alike; it may be that God makes every daisy separately, but has never got tired of making them. It may be that He has the eternal appetite of infancy; for we have sinned and grown old, and our Father is younger than we.”

MORE STICKS... BETTER FIRE
One last point- we burn brighter when we burn together. A stick that is removed from a fire will smolder, smoke, and flame out. Fellowship with others stokes the flames. Surround yourself with people who will fuel your passion for Christ.

My prayer is that all of us burn brightly and revel in this life until the very end. It will inspire our children and grandchildren to see us live with vigor and passion. Sure, there will be seasons of darkness and the blues. But we must never settle. We rage against the night and we find zeal for the Lord.

Maybe this seems naive and foolish- but I am going to keep excited in even the little things- I will keep getting up when knocked down- and I am rolling up my sleeves and attacking it...even now.
Posted by Jayopsis at 9/11/2014 07:59:00 AM No comments:

And it was quite a birthday!

I had my gall bladder removed on Aug 5- and did very little as Melissa moved to Alabama on Aug 8!

But over-all, I feel so blessed.

Started my 25th year of coaching football- BCS is celebrating 50 years- so all of these are fun things.

So leave it to me to add 1 more thing to my plate- I started training on Aug 24 for the Mercedes Marathon.

My last week of August- I ran 26.44 miles and actually feel good. 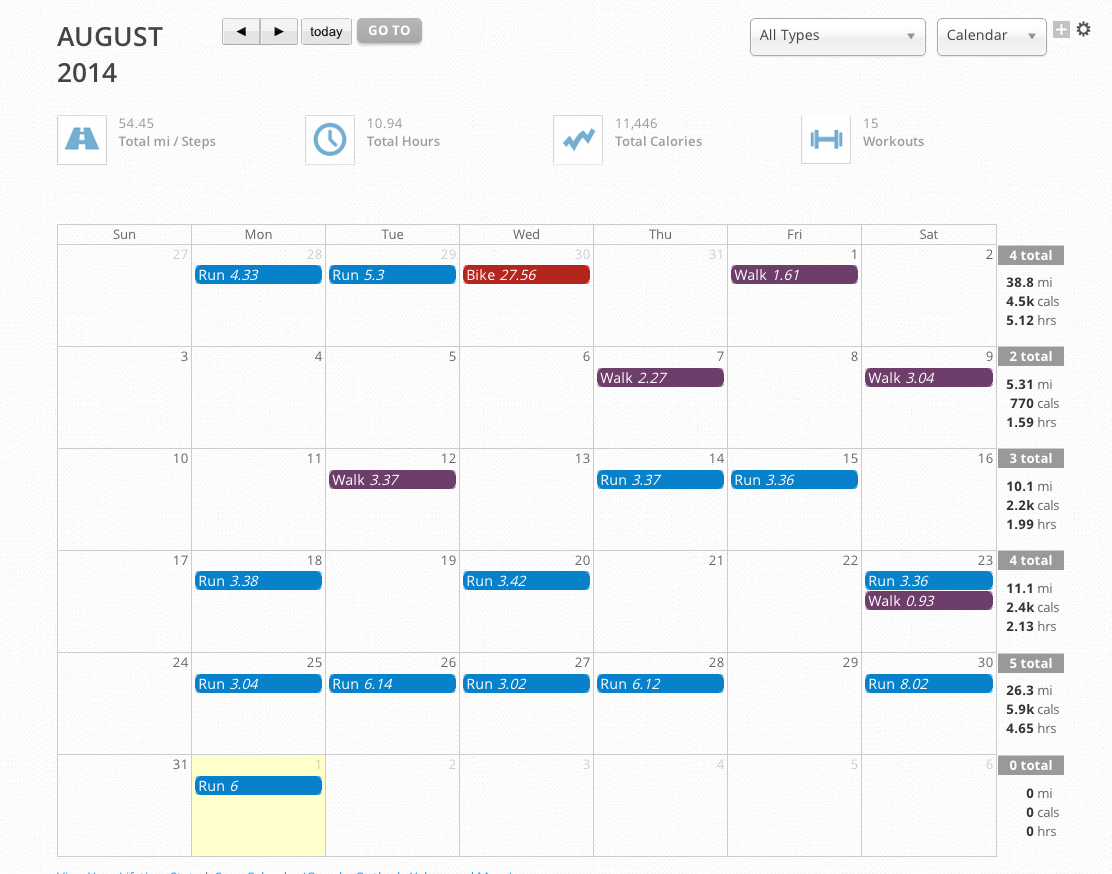 You can see that Aug 4- 12, I was pretty much out of commission from the gall bladder.

I am also getting my boating license after getting stewardship of 2 bass boats!

Look for these to be on the water soon! 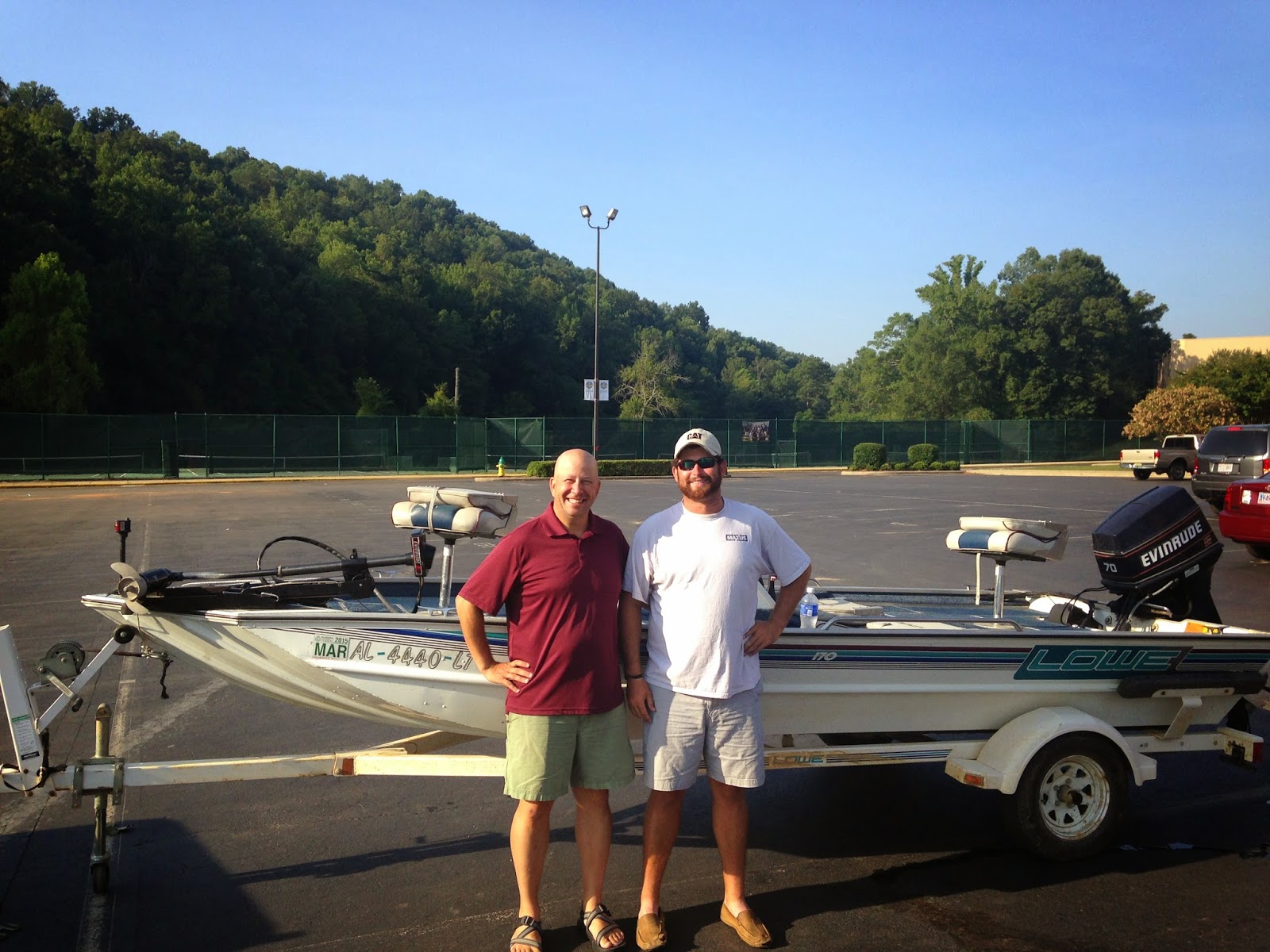 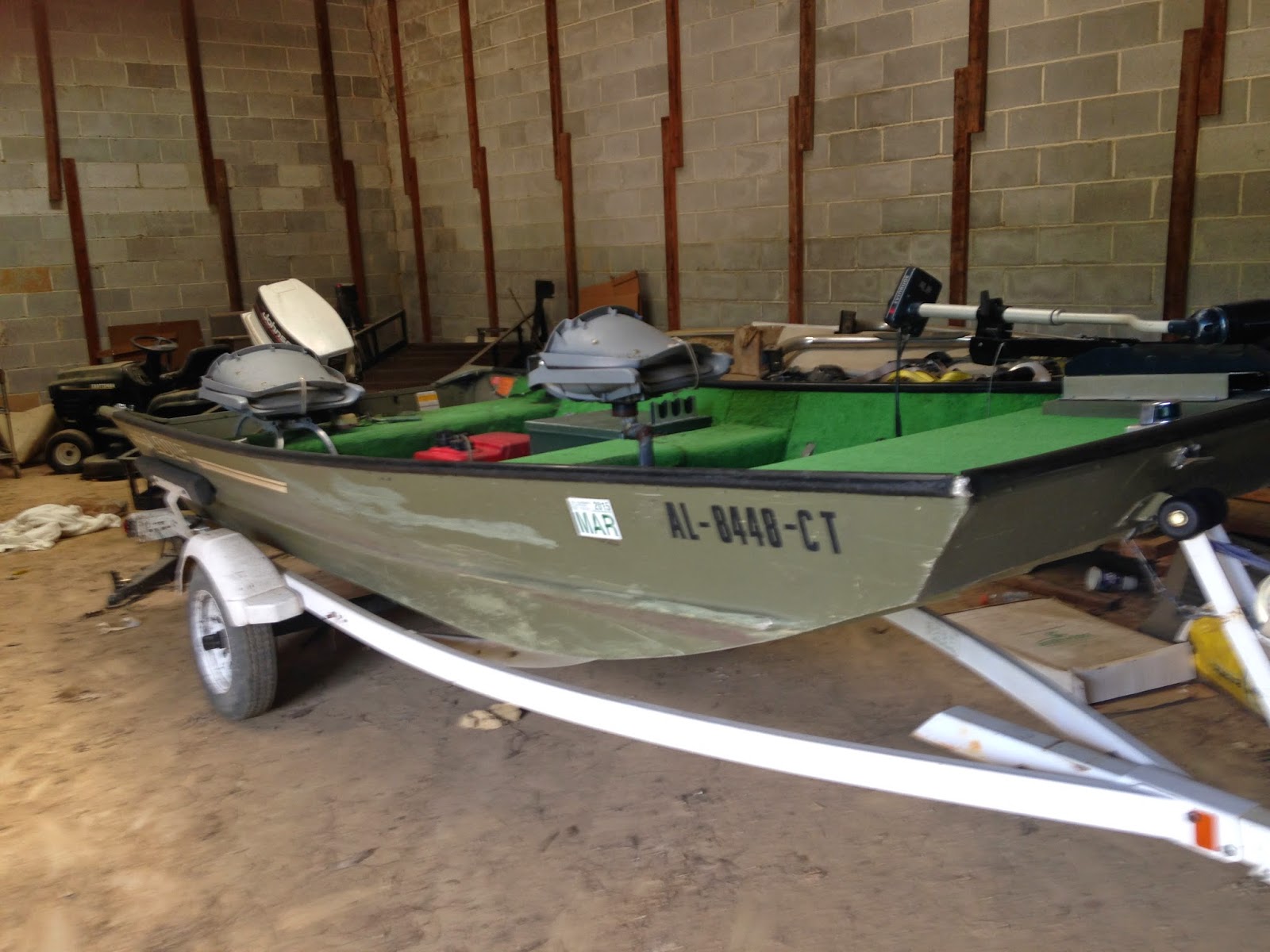 By the numbers: August page views